If you’re at all a fan of the British Royal family, royal history in the UK, Mary, Queen of Scots, or all 3 of them, then a trip to the Palace of Holyroodhouse is a must. The palace is one of the official residences of the Queen when she’s visiting Scotland and is often called just Holyrood Palace or the Palace of Holyroodhouse or variations of both!

This guide should help you with any questions you might have on visiting the Palace of Holyroodhouse and what a visit is like. 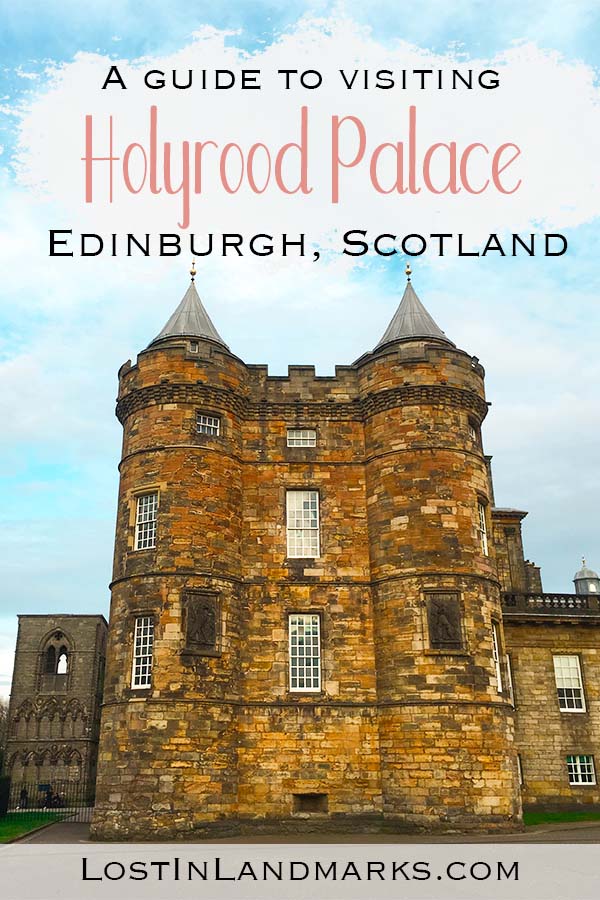 A (very) brief history of the Palace of Holyroodhouse

The history of the site goes back to medieval times and the 11th century when David I, the King of Scotland at the time, had a vision of a deer running past him with a glowing cross between its antlers and this is where the name of the abbey and subsequent palace came from.  Holyrood means holy cross.

Believing it was a message from God, King David had the Abbey was built on the site and as it grew many buildings were added for the monks including royal guest chambers for when the King visited.

The oldest part of the palace that is around today is the north-west tower which was built by James V in the 16th century and the history of that part of the palace includes Mary, Queen of Scots who was, of course, James’s daughter.  The palace was well guarded at the time with a drawbridge and a moat possibly.  Mary lived there between 1561 and 1567 and was witness to many goings on including the murder of her private secretary David Rizzio.

The palace was extended over the years to make it look how we see it now.  The majority of the work took place in the late 1600s by the designer Sir William Bruce when Charles II was restored to the throne after the English Civil War.

Bonnie Prince Charlie used the palace to set up court in 1745 when he was claiming the crown for himself.  Apparently he was greeted with cheers from the Scots as he arrived there.  He stayed at the Palace for 6 weeks before leaving and eventually being defeated at the battle of Culloden the following year.

The Palace has since seen Kings and Queens come and go until our current monarch, Queen Elizabeth II – she still comes to the castle every year as it is the official residence of the Queen in Scotland.  She holds state affairs here, garden parties and often welcomes visitors to the palace.

Edinburgh’s Royal Mile – Our guide to all the attractions

When you visit the Palace there are a few things to do but the main attraction is the tour of the inside of the building.  You can see the staterooms, galleries and the oldest part of the palace where Mary, Queen of Scots stayed. 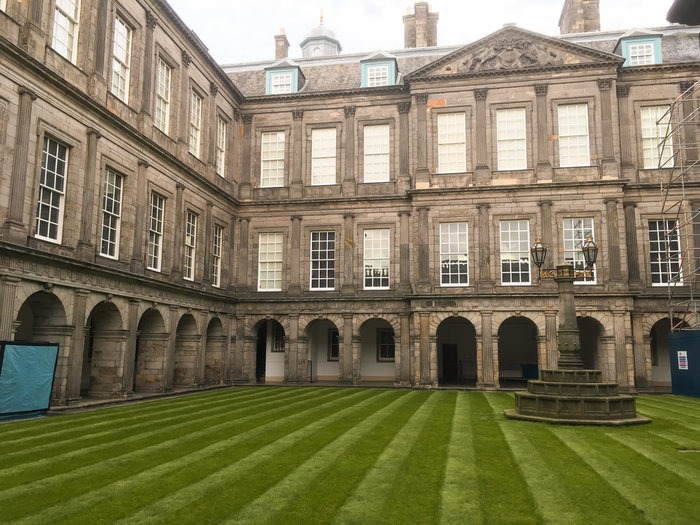 When you arrive at the palace and get your ticket you’ll be given an audio guide with headphones that can be manipulated into any language.  There’s even a children’s version of the tour too, although I’m not sure what that’s like as for once I was child free on this trip!

You’ll start in the courtyard and if you want you can spend as much time out here taking pictures, exploring the grounds and also the Abbey.  When you’re ready to start the tour it will take you round a number of rooms in the palace and the audio guide explains what you’re seeing and sometimes there’s also some extra snippets of interviews from the Royal Family to listen to as well.

There’s no rush to go around each room which I found nice.  I could go at my own pace and really take in all there was to see in the rooms.  Personally, I found the dining room super small – I so expected it to be much bigger!  I loved the royal history and as you go through the palace you learn bits about the characters who used it.

The Great Gallery is interesting if you have any idea of any of the characters in Scottish history.  You can find portraits of Macbeth, Robert the Bruce and Mary, Queen of Scots – all commissioned by Charles II to highlight the royal ancestry of the Stuart line.  You might also spot some of the damaged paintings that the government troops attacked when they had been defeated at the battle of Falkirk in 1746.

Towards the end of the tour, you can see the original tower where Mary, Queen of Scots stayed including her bedchamber.  Many of the original oak panelling still exists and many contemporary decorations too.  There’s a lot to see here – so many items that had a connection with her including some jewellery, books and tapestries.  There’s also a story that the blood stain from the murder of David Rizzio can be seen in the Queen’s Outerchamber – I don’t recall seeing it myself!

You can’t take photos inside the palace, but you can once you’re outside in the courtyard and also in the abbey.

The Abbey of Holyroodhouse 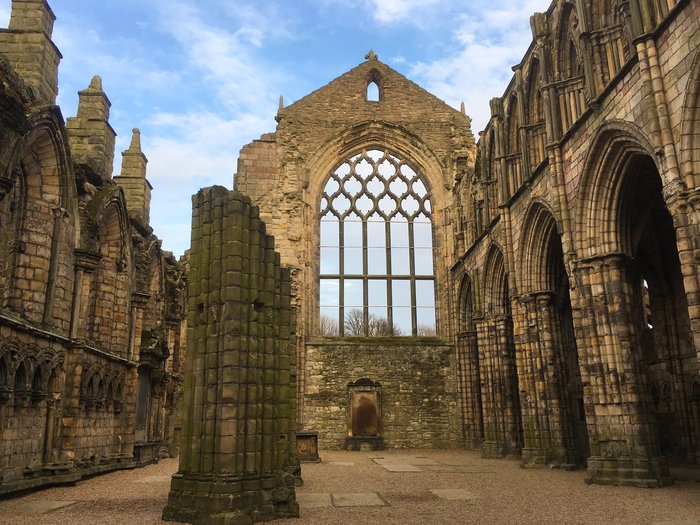 The origins of the palace are rooted around the Abbey that was built in the 12th century and it’s an interesting little place to wander around even if it is in stark contrast to the palace which is of course in great condition.  The Abbey is now in ruins but there are lots to see still including the Royal Vault that includes the remains of James V and plenty of information boards that show how the abbey would have looked in its heyday.

Tours of the Abbey run every hour through the day if you’d like to get more information about the history and legends that surround the abbey.

Interested in more abbeys? – Our guide to the medieval Abbeys of the Scottish Borders is here 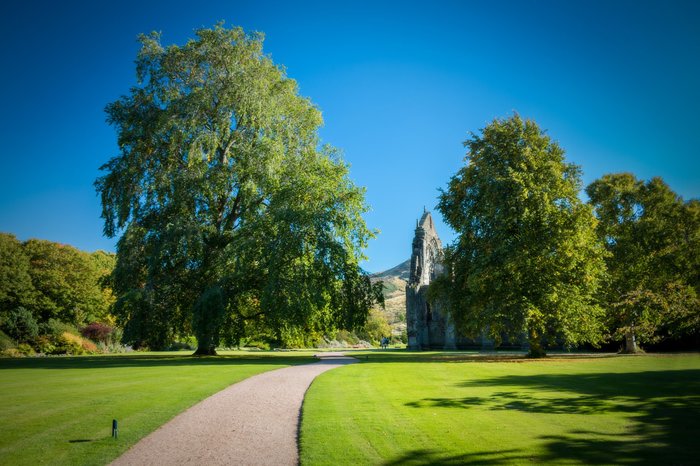 You can look around the gardens that surround the palace on the standard admission ticket although it is only open fully in the summer months from April – October and in December.  In the winter months, it’s only open on weekends.

I would love to go back and be able to look around in the summer when everything is in full bloom.  It’s a lovely, huge open space that is a welcome relief from the crowds of the city.  There are also some historical pieces to note too including a sundial that was made in the 1600s for the coronation of Charles I.

You can go on a tour of the gardens if you buy a combined ticket to the Gallery and the Palace.

The Queen’s Gallery is a sperate attraction that houses many paintings and exhibitions often with a Royal theme.  The exhibitions change over time but recently have been about the Russian Romanov’s, Prince Harry and Megan’s wedding and coming up in late 2019 is a display of the works of Leonardo da Vinci.

Love castles? – Here’s our guide to castles in or near Edinburgh

I managed to spend a good couple of hours visiting the Palace.  I was on my own so could go as fast as I liked and I was definitely mindful of the fact that I was there late in the day and it would be closing soon.  I could have spent a lot longer there especially if I’d taken time to visit the Queen’s Gallery and the Palace gardens more too.

If you can, schedule in at least half a day to get the most of your time there.

When is the Queen at Holyrood Palace?

The Queen spends a whole week in Scotland at the end of June and beginning of July.  This is known as Holyrood Week, or Royal Week to those in Scotland, and sees the Queen base herself at the palace while she visits many places and the people of Scotland.

When the Queen is staying at Holyroodhouse the Palace is closed to the public although you can still visit the Queen’s Gallery.

The Royal Standard is flown from the palace when the royal family is in residence and the Scottish flag is flown when they are not.

Bear in mind that in order to allow enough time for your tour that there is a ‘last admission time’ and in winter that is much earlier than I had envisaged.  I nearly didn’t make it in time!

Admission prices are as follows:

If you think you will be able to return and want free readmission then you can get your entry ticket treated as a donation to the palace and your ticket will be stamped allowing a years worth of free admission.

Best place to get tickets

Tickets are available at the palace itself and if you’re travelling out of season like I was doing you may find that it’s fine to just purchase at the time.  If you’re travelling in high season you might like to book ahead.  You can book tickets for the Palace here and for the Queen’s Gallery here.

If you’re planning on visiting Edinburgh Castle, Royal Yacht Brittania and the Palace plus want to do a hop on hop off bus tour as well then it might be worth checking this all in one ticket. 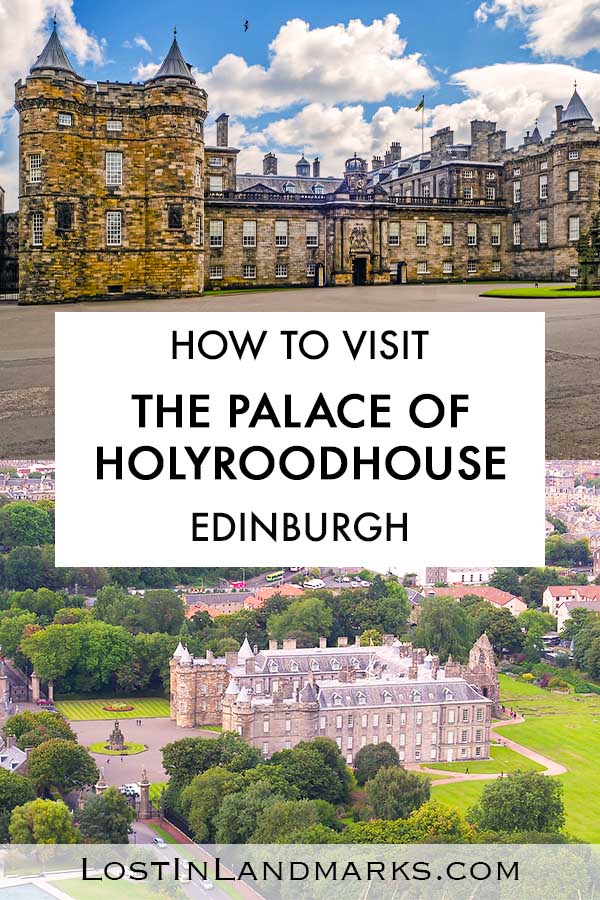 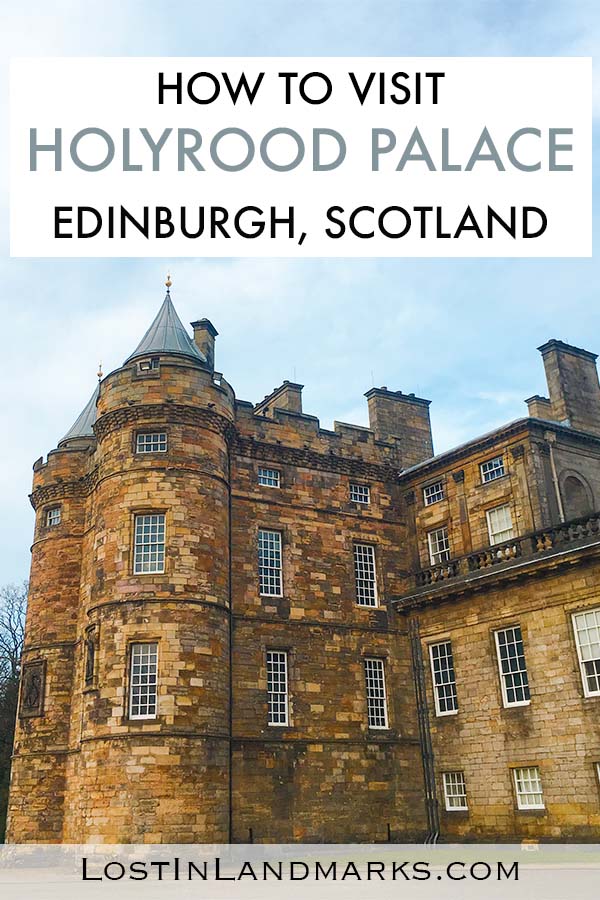 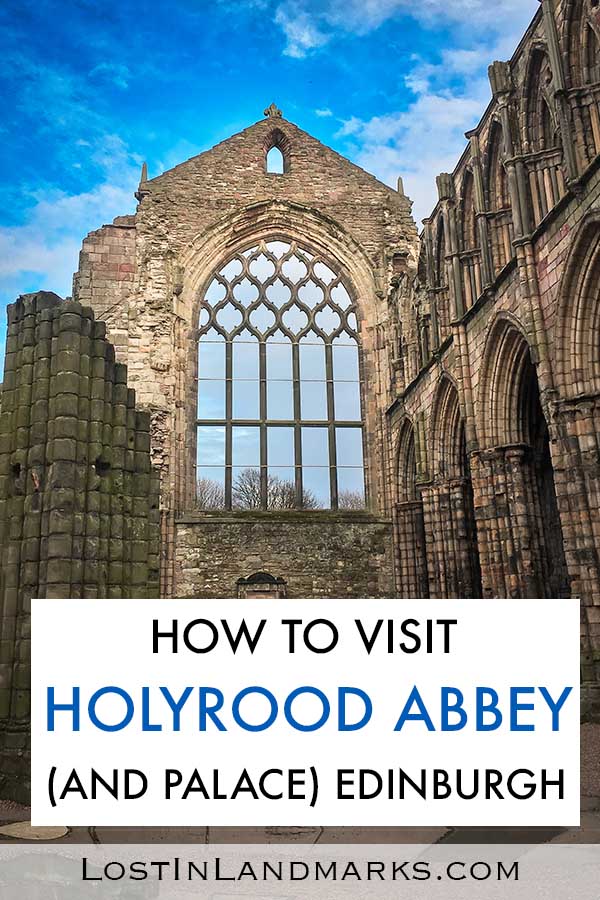