One of my favourite areas to visit in the UK is the Northumberland coast.  There are many reasons for this, it’s a beautiful area, it’s relatively quiet even in the peak holiday season but most of all I just love the history of the area.  There are so many places to visit but these Northumberland castles would definitely be on my recommendation list for you if you want to visit the area.

How many castles are in Northumberland?

Since Northumberland is located in the north of England and borders Scotland it was a site of battles and power struggles.  Loads of castles were built in the area to provide defensive positions for the area as the Scots took back land and then the English returned the favour.  For this reason, it’s one of the counties with the most castles and there are supposed to be over 70 castle sites in the area – of course, many of these will have gone by the wayside over the years but there are still a good number that can be visited if you’re in the area!

5 romantic Northumberland castles you can visit 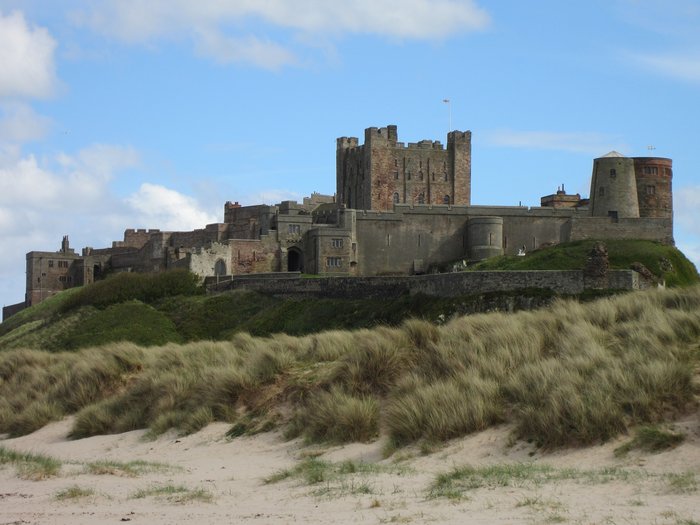 A stunning castle that lies on the Northumbrian coast is Bamburgh.  It’s located in a really small village with a few shops, pubs and cafes but the real draw is the beach and the castle as a backdrop.  It’s an amazing beach that stretches for miles and even when it’s busy it doesn’t feel overcrowded.

From as early as 420 AD there has been a fort at the location of Bamburgh castle.  It was a stronghold that went from the Anglo Saxons to the Britons and back again many times before finally being destroyed by the Vikings in the late 900s.  Once the Normans arrived in England a new castle was built and that is the base of what is there now.

As with many castles in the UK it fell into disrepair in the late 18th and 19th century.  It was then bought by the Armstrong family who have restored and looked after it to get it to the state that you see today – a huge improvement!

Want to stay in the grounds of the castle?  There are a few options in the castle estate but this one in Neville Tower actually is within the castle walls itself and has a lovely view over the beach and the castle.  You can see more info here.

Bamburgh is open daily from the beginning of February until the end of October (if you’re travelling at either end of those dates do check as they may change) from 10am – 5pm.  From November until the end of January the castle is only open at weekends from 11am – 4.30pm.

Parking is easy and free in the village – just drive through and at the base of the castle is a large car park for cars and also motorhomes. 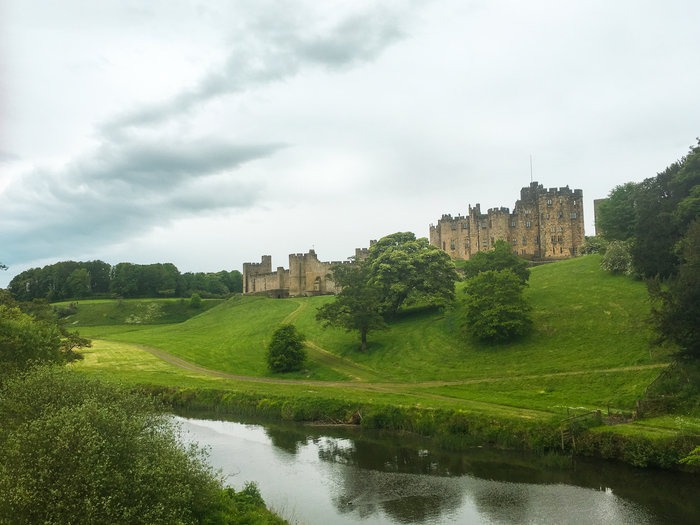 Ever since we watched the first Harry Potter films we knew we’d love to visit a real life Hogwarts.  Of course, many different filming locations were used but one castle that was famously used in the first couple of films was Alnwick Castle.  It was used to film the outdoor scenes where Harry and friends were learning to use their brooms for the first time.  When Neville manages to get himself stuck on the castle that was filmed here!

Alnwick Castle was built in the 11th century and unlike Bamburgh this one is inland and not overlooking the sea.  The Duke of Northumberland still lives in part of the castle although the rest is open to the public – it’s one of the largest castles still lived in in the UK (after Windsor).

The castle is open daily from the end of March until the end of October (exact dates may vary from year to year so do check if travelling near either end of these dates) 10 am 10am – 5.30pm.

Alnwick is a really nice little town to visit too – we found the parking a little confusing at first though.  Basically there are certain car parks that you need a permit sticker for, I imagine these are more for the locals to use as they’ll have the sticker, but also right alongside them there are ‘normal’ car parks.  Just be aware where you are parking and you should be fine – it was busy, but we were travelling in the school holidays so this was to be expected.  Parking was free also.

Tours to Alnwick Castle from Edinburgh

There are a number of tours from Edinburgh to this area and to specifically Alnwick Castle (I blame the Harry Potter Effect!) but also including Holy Island too.  If you’re looking to visit on a group tour then I suggest looking at this tour which comes highly recommended or alternatively this one. 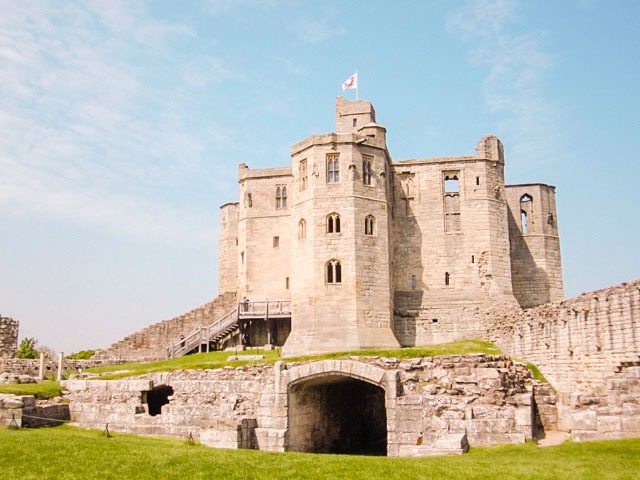 Warkworth Castle has a stunning example of a Norman keep which was built in the 1100s – it’s a fairly small structure in comparison to both Bamburgh and Alnwick, but it’s really impressive nonetheless.

It was a residence of the Percy family, remember those who also own Alnwick?  They were the wealthiest landowners in the North of England and it definitely showed!

The castle is now in ruins, it fell into disrepair in the 1500s and although many attempts to revive it took place by the Percy family over the years it was eventually passed to the State and declared an ancient monument.  It’s a really interesting castle to look around – we went many years ago now and we all enjoyed the audio guides to help bring the history to life.

As well as the castle, there’s also the remains of an old chapel – the Hermitage – to be seen.  It’s on the banks of the nearby river and is carved out of the rock face – really unique!  It’s not open every day so do check if you want to go and see it.  It’s accessible by boat.

The castle is open daily through the summer months from March until end of October.  Opening times vary and you should check their website for up to date times.  The Hermitage is only open certain days through the year – again, it’s best to check the official site if you want to visit that specifically.

In winter months the castle is also open but just on Saturdays and Sundays.

Car parking is available at the castle and there’s also parking in the village which is lovely to walk around as well. 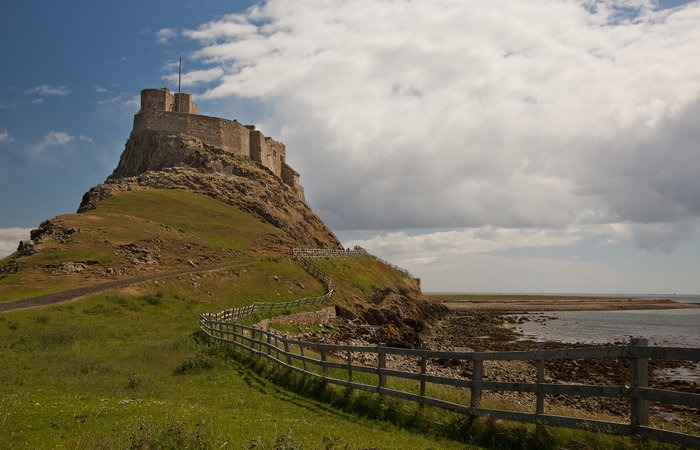 The island of Lindisfarne is actually connected to the mainland via a causeway and it’s also known as Holy Island.  You can get there by car at certain points of the day and it’s a really nice place to visit with the Priory, some lovely walks, nature and village too.

Of course, the castle is another attraction and the one we’re interested with here.  Lindisfarne castle is the newest one in this list being built in the 16th century at the time of Henry VIII.  When the monasteries were dissolved the castle was built to provide protection to the coast from the Scots and also the Spanish.

Inside the castle there is a lot to see and it’s just undergone fairly large restoration works.  It’s been left in the style of the early 1900s when it was a holiday home.  It’s quite different to many other castles although we did visit back in 2012 so it has perhaps changed a little now.

Do check opening times at the National Trust website and also be aware of the tidal crossing times so as not to get stranded there!  It is closed through the winter months of November to February but of course you can still get some stunning views of it from the outside!

There is a large car park on arrival at Holy Island that visitors are requested to park in rather than clog up the village which is quite small.  There is a charge for the car park (I think we paid £3 or £4 for a few hours) and the machines only take coins.

Tours to Holy Island from Edinburgh

As with Alnwick Castle there are many tours departing from Edinburgh that cover Holy Island and the castle of Lindisfarne.  Check out this one or any of the tours displayed just below:

Interested in Holy Island and the Priory? – A visit would tie in very nicely with some Scottish Border Abbeys trips (It’s not too far!) 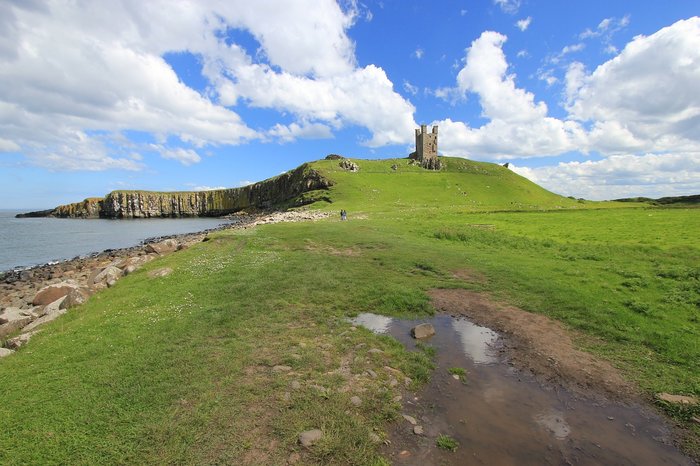 We didn’t actually visit this castle ourselves and I’m kicking myself because it looks absolutely gorgeous although we did see it from afar while walking on a nearby beach.  I have a soft spot for ruined castles!

Dunstanburgh Castle lies on a headland of the Northumbrian coast just a little south from Bamburgh.  It was built in 1313 as part of a hostile time between the King, Edward II and the Earl of Lancaster and was apparantly much bigger than it looks.  The Earl’s rebellion didn’t amount to much and he was beheaded before he could even get to the castle.

Over the years it was a scene of much fighting, especially in the Wars of the Roses time but after that was abandoned as it decayed. 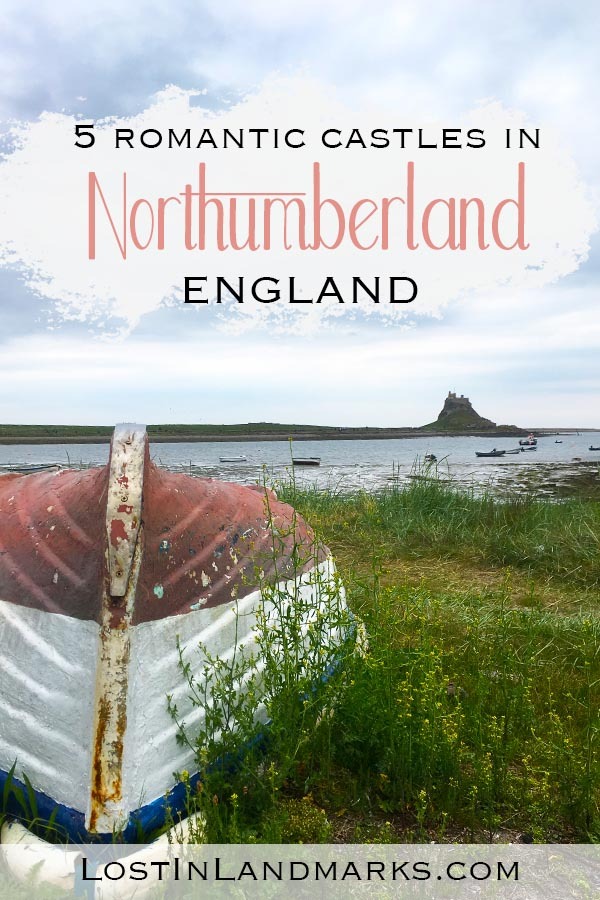 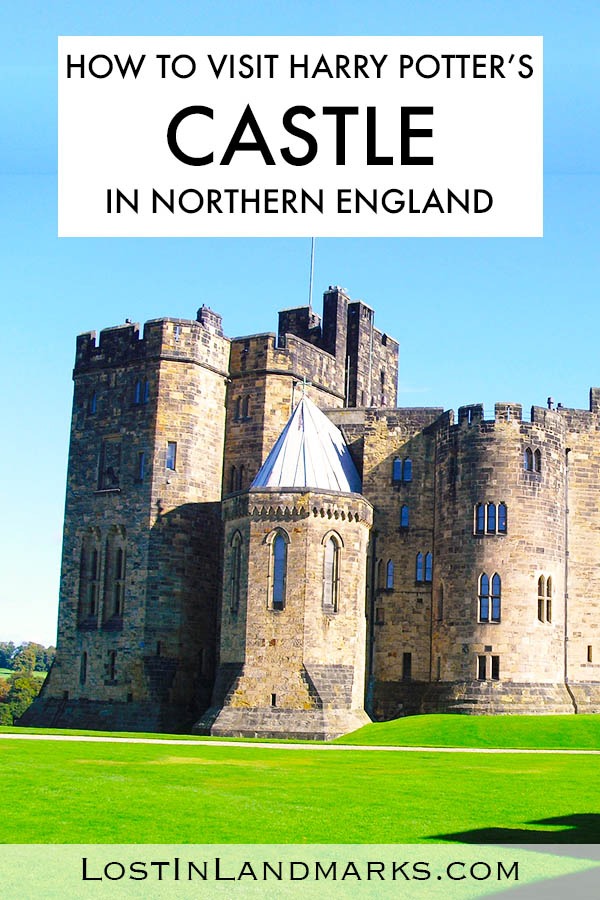