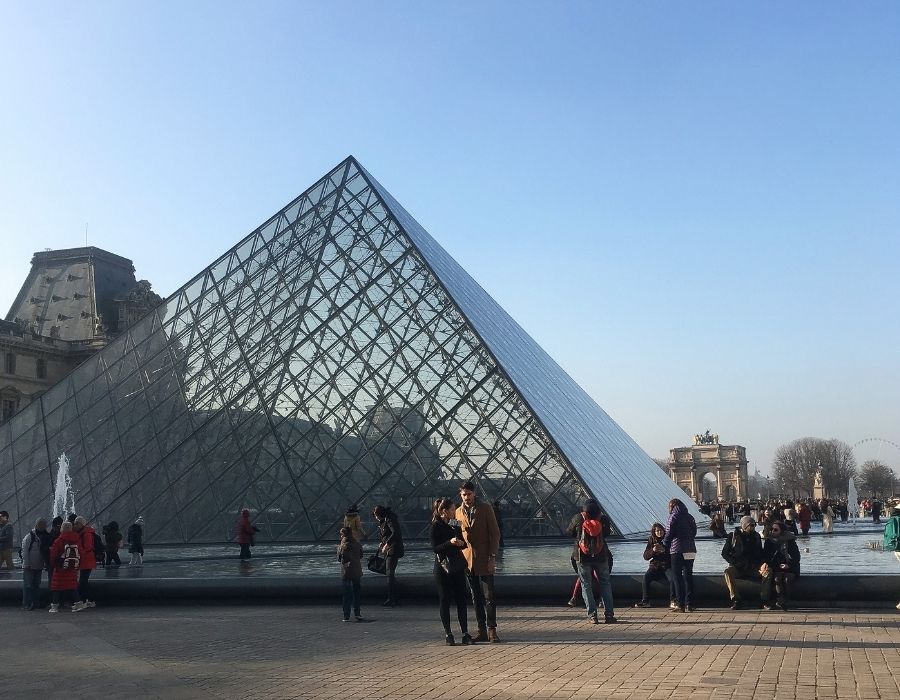 No visit to Paris is complete without checking off at least a couple of historical sites.  Some you might not think too much about since it’s just quintessentially Parisian but hopefully this blog post will help you make the most of your time and perhaps even impress your fellow travellers with a nugget or two of knowledge!

The 7 historical sites in Paris that you should add to your list! 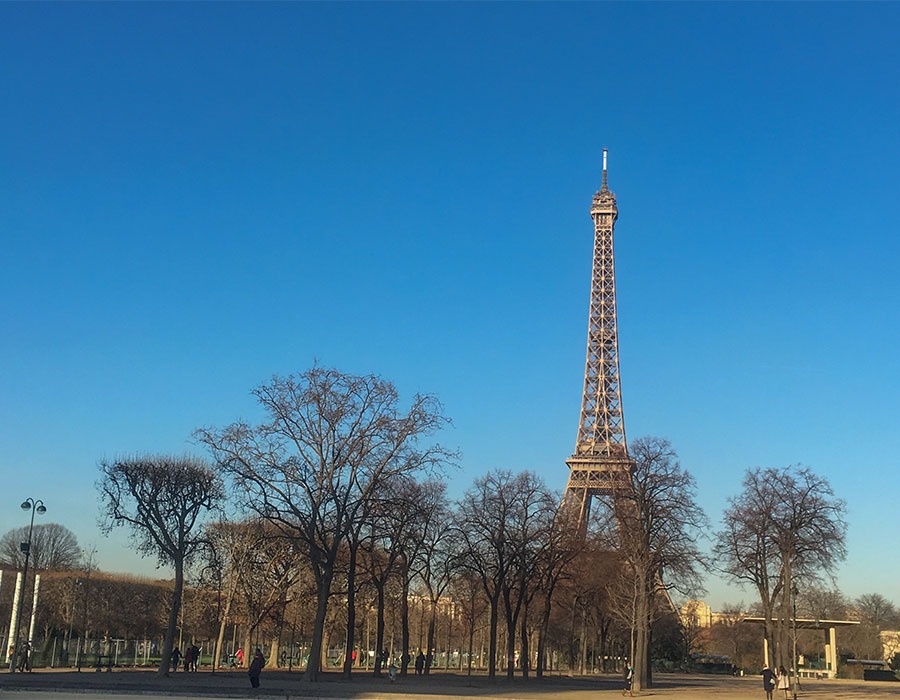 Of course the Eiffel Tower tops this list of historical sights in Paris and rightly so.  The amazing spectacle dates back to the 1889 and it was built as part of a World Fair that took place in the country.  I couldn’t believe that it only took 2 years to build the structure and it welcomed through an astounding 2 million people at that opening event.

The tower was only supposed to be around for 20 years, and was due to be deconstructed in 1909 however it was given a reprieve by the government as the architect Gustave Eiffel was using it for scientific experiments and so it was allowed to remain.  I can’t believe it ever coming down now!

It can get extremely busy at the Eiffel Tower for visiting so buying tickets in advance is always a good idea.  Don’t do as we did and just turn up – we eventually decided we’d spend our day just admiring it from the bottom rather than wait in the queue! 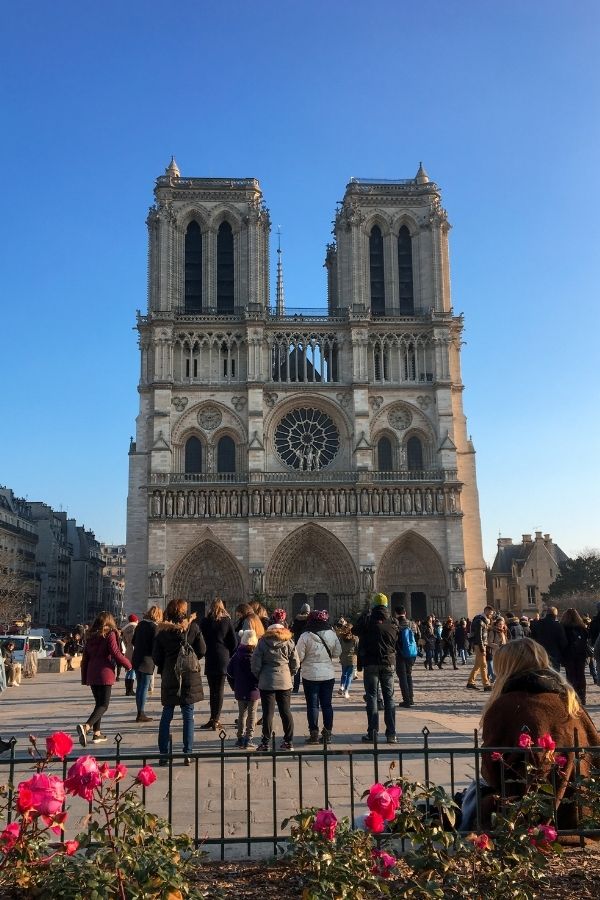 The Cathedral of Notre-Dame in Paris is one of those buildings that you see so many times in pictures, especially when planning your visit.  In saying that, I wasn’t expecting the overwhelming beauty of the cathedral to strike me as much as it did.  Although it’s still closed to visitors inside since the fire of 2019 you can hopefully enjoy seeing the building from the outside.  I know for me, just looking at the wonderful carvings and decorations of the stone was a joy to see.

The cathedral dates back a long way, although it has gone through some turbulent times in its history.  It was mostly completed around 1260 although work began on it 100 years earlier.  Through the French Revolution much of the building inside was destroyed or damaged and since then it’s been restored to how you see it now.

The most recent bit of turbulence Notre-Dame suffered from was the extensive fire in April 2019.  It has since been closed to visitors and remains that way to this date – it’s thought it may well be open in 2024 in time for the Olympics that year.  You can still see the building from outside but do bear in mind some parts may be covered up as it undergoes the work to repair it. 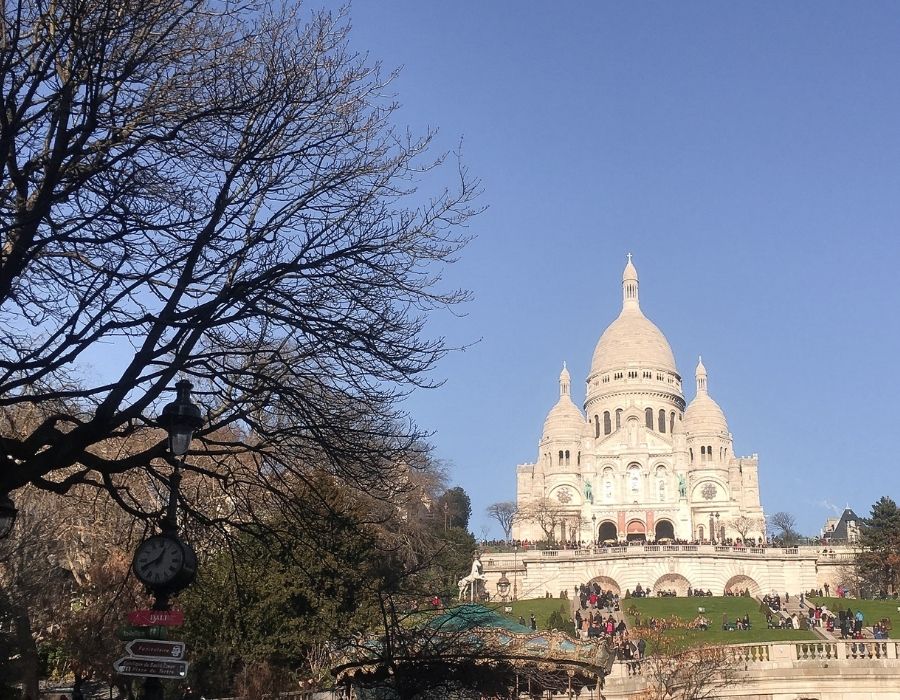 Part of the 18th Arrondissement, Montmartre relates to the large hill and surrounding historic district that is well worth a visit when you’re in Paris.  It’s a little out of the way of the centre of the city but it’s easy to get to using the Metro.

Many well known artists frequented the area around the late 19th and early 20th century including Monet, Renoir, Picasso, Degas and Van Gogh.  To this day you’ll see artists on the street and in the Place du Tetre square selling their wares and their talents, although it is possibly a little more touristy these days!

It’s a lovely area to visit with beautiful architecture to enjoy, old streets to wander down and of course the artists and their work to explore.  As well as this make sure to take some time out to visit the Sacré-Cœur which is the large and imposing white church at the top of the hill.  It’s free to enter and look around but can get busy through the day.  It’s not as old as you might think, having been built in 1875.

While in the area look out for a couple of famous cabaret sites which were frequented by many of the artists, poets and writers of the time – first of all is the Le Chat Noir which is probably best known for the vintage posters that have lingered long after the club closed down.  It moved sites but it’s commemorated at 84, Boulevard Rochechouart.  The Moulin Rouge, another cabaret which gave us all the Can Can,  also isn’t too far away and should be sought out – the original building was destroyed by fire in 1915 and rebuilt in 1921. 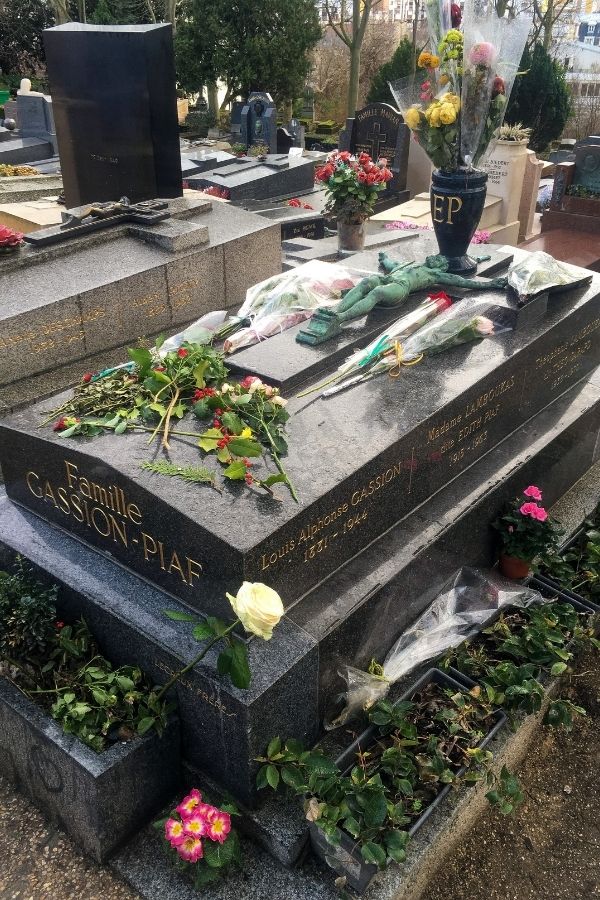 If you want to escape the crowds of the city then you would do no better than to hop on the metro to Père Lachaise cemetery.  It’s a huge cemetery which holds the graves of some important and amazing people from history.

If you have no interest in seeing famous people’s graves then you might just enjoy a wander around, taking in the fresh air and the open space but if you do want to learn more then you have a couple of options.

There are some guided tours of the cemetery that are great if you want the insight from someone who knows all about the people buried there and the stories of their lives.  Alternatively you can download a map from the website here – when we visited we simply used the map in our Lonely Planet guide book.  Do what works for you!

Some of the big names buried there include:

You can get to the cemetery by taking the Metro line to Philippe Auguste (on Line 2)  for the main entrance.  There are a few different entrances and different stops nearby as well.  The cemetery is free to go around and is open daily.

A number of walking tours take place in the cemetery, both private and group tours are available – Check out what’s available here
You might also like… our blogpost: WW2 beaches in Normandy Itinerary

The Louvre is one of Paris’s most popular sights and rightly so.  You don’t have to love art and crowds to enjoy a little of the building that the Louvre museum is housed in though.

The building was originally a fortress built in medieval times and eventually it was a palace used as a residence by the French Kings.  After the French Revolution it was decided that it should hold French masterpieces and it’s been a museum ever since – it opened in 1793 so that’s quite a long time!

You can explore around the gardens and take in the wonderful architecture without having to enter the museum so if you’re short on time then I suggest adding it in to your itinerary anyway.  The gardens are a joy to walk around and you can sometimes forget you’re in the centre of Paris!

Of course you can then go on to enjoy all the history within the museum too – it holds objects that date back to Ancient Egyptian and Greek times up to the 21st century.  And, of course, it houses Leonardo Da Vinci’s ‘Mona Lisa’ among many other paintings too!

I recommend skip the line tickets if you do want to visit the museum – save yourself some time queuing!

Skip the Line at The Louvre – Check out ticket options here 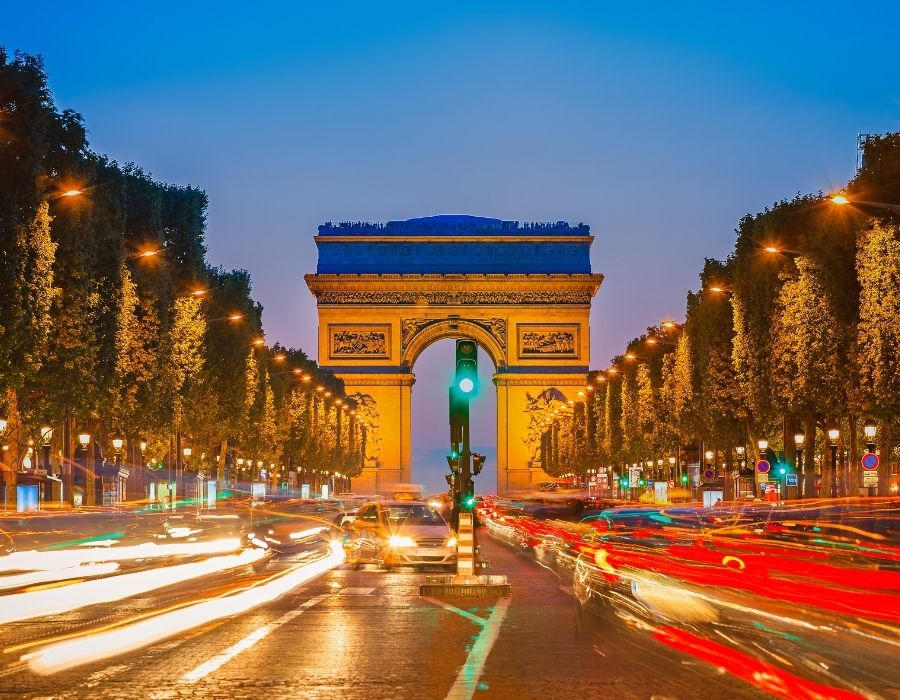 Completed in 1836, the Arc de Triomphe was commissioned by Emperor Napoleon Bonaparte after their victory at Austerlitz in 1806.  By the time it was completed the Napoleonic wars had ended and Bonaparte was dead and although he didn’t see the final result his remains eventually were passed under it when he received a state funeral in 1840.

The Arc de Triomphe commemorates the French who fought in the Revolutionary and Napoleonic Wars as well as also having monuments to the soldiers of the First and Second World Wars.

It’s a really impressive structure so I’d recommend visiting it if you’re in the area, no matter how many times you’ve seen it on the TV!  It does get really busy around there, especially with cars and traffic so make use of the underground passages around to get you to the Arc De Triomphe in the safest way.

You can visit inside and take a trip to the top which gives some amazing views of the city and a small museum detailing the building of the Arc and its history.

Why not add a Seine cruise to your Arc de Triomphe visit? – Check out this amazing tour! 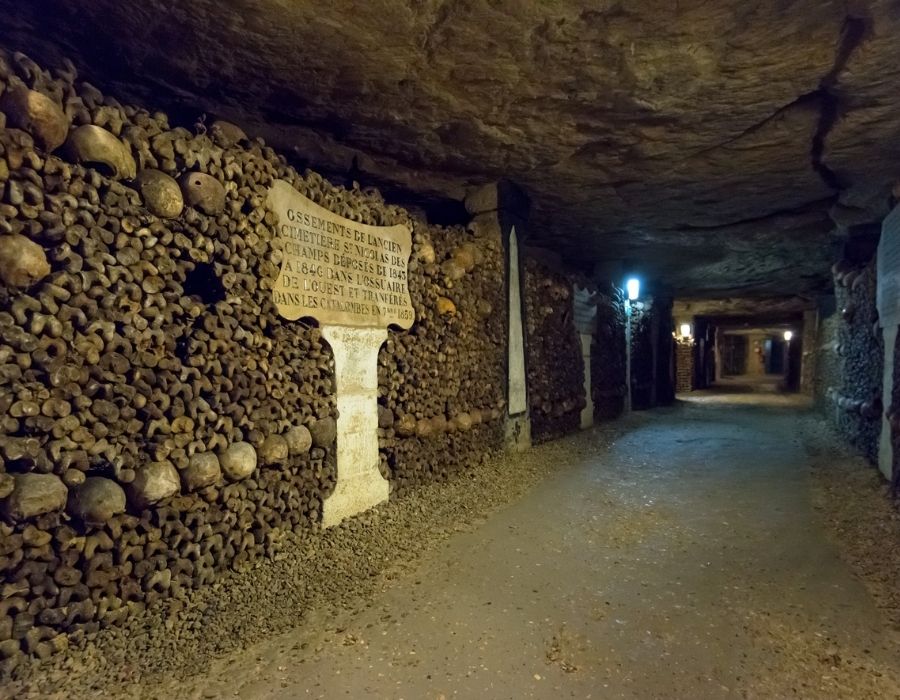 I admit that I haven’t been to these myself – a combination of time and also a child who didn’t fancy the creepiness of it!  The Paris Catacombs are one of those sightseeing activities that you might not think of straight away but is actually incredibly popular and well received.

In the late 18th century many of Paris’s health problems were blamed on the cemeteries at the time.  One solution they had was to move all the bodies and bones to an underground site.  The beginning of what is now known as the catacombs!  Bodies were removed in the night time to not upset the people of the city – it’s quite an amazing thing to imagine especially when you see how many bodies were transported!

The site was opened in 1809 to the public and it’s been a place of wonder ever since.  If you’re interested in the quirky and slightly macabre history when you travel then you should definitely add this one to your list!

Skip the Line and get a Guided Tour as well! –  Check out the tour options here

1 thought on “7 historical sites in Paris you must see”