When we first bought our blue Mini our first thoughts was of driving from UK to Italy and having an Italian Job Adventure!  We all love the film, quote the lines and thought why not?

Italy had been on our radar for years, we’d planned to go in 2013 when we were driving round Europe in a camper van but felt that we didn’t want to be so far from home in a van that we thought was struggling and we’ve wanted to visit Venice for ages, but there always seemed to be something stopping us.

You know when you think a country is just being elusive?  That was Italy for us – so close, but still we were unable to make it work.

We had a month after our Scottish house sit before another one we had lined up in London was going to start and so we decided to get moving with our Italian road trip!  I searched high and low for an apartment for us for the month and settled on a gorgeous apartment from Airbnb in the town of Cogoleto (I’ll share pics of this in the next post – see here).  Cogoleto is on the Ligurian coast, which is in the North West of Italy, just south of Milan and Turin and very near Genoa.  It didn’t seem that far on the map!

Driving from UK to Italy

We had a long journey just in the UK as we were coming from Scotland, but we combined it with some cheap Travelodge hotels which broke it up nicely for us.  We did our normal Dover crossing early with DFDS Seaways which always seems to have the best prices for us, touched France briefly, picked up some food supplies in their supermarkets and begun the long task of driving through Europe. 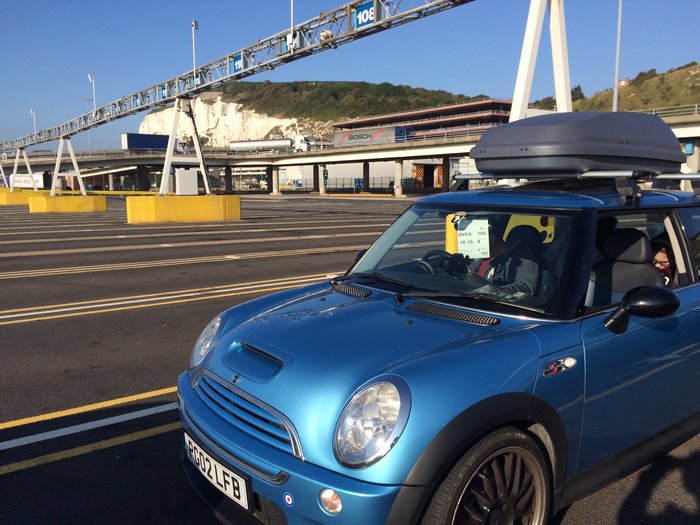 At Dover Ferry port – ready for our Italian Road Trip!

When deciding our route for driving to Italy from England, we chose to drive through Belgium, Luxembourg, back briefly into France and through Switzerland to Italy.  We chose this route as a) we’d never been to Luxembourg before and b) there were no French road tolls.  Road tolls in France can be really high and we, as always, were on a budget!

Day 1 – Driving through Belgium to Strasbourg

I’m not one for lumping generalisations on nationalities for their driving skills, but we really had a tough time in Belgium and driving there.

When we were there and driving in our Van we didn’t particularly enjoy the roads and the busyness of the motorways but thought that perhaps we’d just been there on a bad day.  This time we had the same feelings and quite frankly couldn’t believe some of the manoeuvres and driving styles we saw driving through Belgium!  James drives for a living and I had to take over from him because he was getting so stressed!  Mostly it was erratic driving and not leaving any space in front when moving in front after overtaking.  Quite a scary place to drive!

(edit – in 2018 we drove through Belgium again.  It wasn’t so bad this time so maybe we were just unlucky and the stress of the long drive ahead of us was playing a part!)

We were glad to get to Luxembourg, although didn’t see much of the place due to it taking us longer than we expected to get that far.  We filled up the car there as it’s the cheapest place to get fuel and carried on driving.

Our first leg was due to be around 6 hours of driving on mainland Europe.  It sounded a good idea and doable at the time, but I’m not sure who I was kidding!  It was a LONG day, took way longer than 6 hours and when we arrived at our very budget hotel in the outskirts of Strasbourg we were so fed up.  There was nowhere to eat either and we ended up having a really rubbish meal of whatever food we had in the car.  Our Italian road trip wasn’t sounding so romantic!

Day 2 – Driving from Strasbourg to Italy

We needed some decent food so got up early and drove to the next supermarket on our route for breakfast as soon as it opened.  That felt better!

It was another 6 hour drive or so, but we didn’t have the ferry trip at the beginning like the day before. 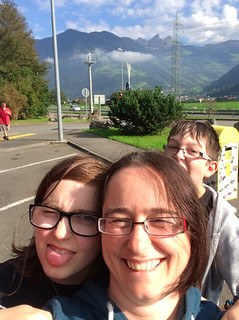 Driving through Switzerland was lovely, none of us had ever been there before so we could all tick off this beautiful place.  I just wished we had more time to explore – an adventure for another time maybe!

Even our stop at a service station to stretch our legs and have a toilet break was beautiful.  The scenery was just stunning.

It didn’t seem to take too long to reach the other side of Switzerland, perhaps because we were enjoying the scenery and the roads, although the really long 15km Gotthard tunnel was interesting as it was very hot when we were driving though it!  No time for claustrophobia!!

Our plan was to stop in Lake Como for Lunch and we made it there nice and easily, finding a nice car park as soon as we arrived (I always get stressed about finding car parks!!).  We took our lunch to the waters edge and just enjoyed some people watching, leg stretching and the beautiful scenery.  Lake Como has been on our list of places to visit for ages so it was great to be able to finally see it. 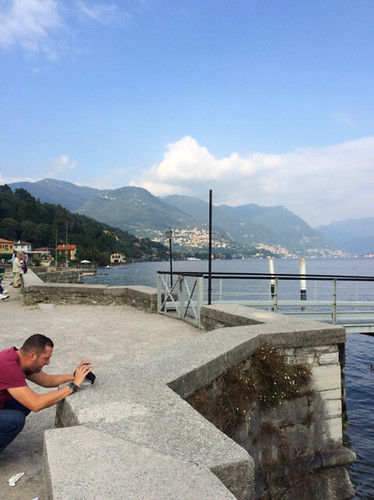 We were about half way to our destination now so back in the car to test out some Italian motorways and see how the Italians would drive!  We arrived in Cogoleto at late afternoon to see the Mediterranean sparkling in the light and, after a bit of a worry trying to actually find our AirBnB place we were there and settled.  Phew!

The drive from UK to Italy was a long one, way longer than I expected it to be I think.  Next time I think I’d try and take at least another day to do the trip and enjoy the journey a little bit more.  On our return we decided to just pay the tolls and drive through France rather than Belgium and actually that worked a lot better. 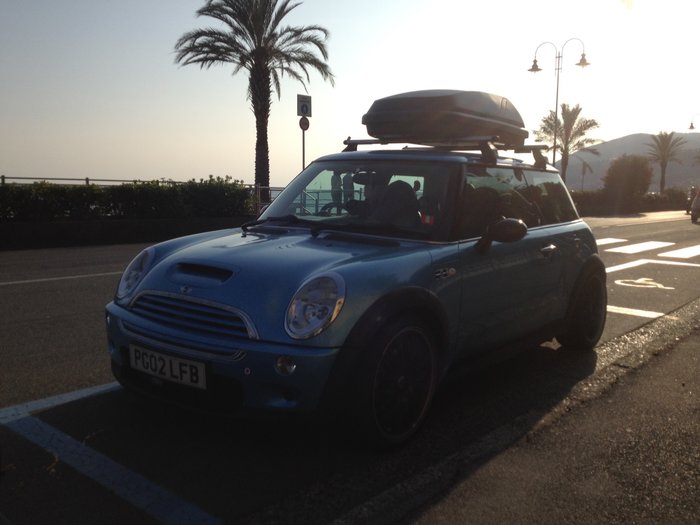 Visiting Pisa? – Here’s our thoughts on our day trip to the famous tower – see here.

Tips for driving to Italy from England

Overall it says it takes around 11 hours to reach the Italian riviera coast from Calais and if you’re driving deeper in to Italy then expect it to take much longer.  We found that an early ferry crossing from Dover allowed us to get a decent amount of driving done before having a stop over half way down the route.  You could do it in a day or overnight if you so desired, but it would be a very long day.  Obviously if you’re driving further you might want to have 2 stopovers on the way down.  We had kids with us so that fueled our desire to not have driving days too long.

Don’t discount the french toll roads – I often see people say to stay off them becuase they can be so expensive and while that is true, sometimes if you’re just needing to get somewhere it pays to get there quickly and easily.  The toll roads in France are often quiet too which means a nicer, if a little boring experience.

You’ll need a Vignette for driving through Switzerland and the tunnels there.  You can buy this at the border and it costs around 40 Swiss Francs (you can also pay in Euros).

Be aware if you enter Switzerland through the Mont Blanc tunnel you’ll pay a toll there that isn’t included in the vignette.

Stock up on water for in the car, especially if you’re driving in the height of the summer.  It can get really hot!

Tips for driving in Italy

We thought that Italy would be a crazy place to drive in, but in actual fact we found it quite a good place to drive.  Don’t listen to the generalisations of the country!

Italian motorways (autostrada) are really good and are the best way to get from A to B really.  In France there was always another route to go to avoid tolls, but the tolls in Italy aren’t so easy to avoid.  We foudn that it’s better to assume you’re going to have to use the Italian motorway tolls and budget for it accordingly.  If you really have lots of time to spare you can avoid them and enjoy a myriad of small italian towns driving along the coast!

You take a ticket when you get to the toll booth and pay, in cash, when you exit the motorway.  Really easy – just don’t go in the Telepass lane as you’ll not be able to pay there.

The speed limits in Italy are in Kilometres per hour and don’t think that you can drive as fast as you want and get away with it.  We saw plenty of people driving above the speed limit and never saw any police presence but I’d definitely recommend just sticking to the rules even though it may seem like the driving rules in Italy are lacking!

Definitely invest in a good map if you’re planning to do a lot of driving in Italy and Europe.  Up to date versions are of course always recommended!  We used the Collins European road map ourselves but there are many that are good if you have a favourite brand.

We also used a sat nav with European maps – I like to use my phone, but after a couple of times when over in Europe and having it not work, I always like to have a back up sat nav!  It’s also useful if you’re worried about using your data up on your phone.

Interested in Genoa? – Check out what to do on a day trip to Genoa here. 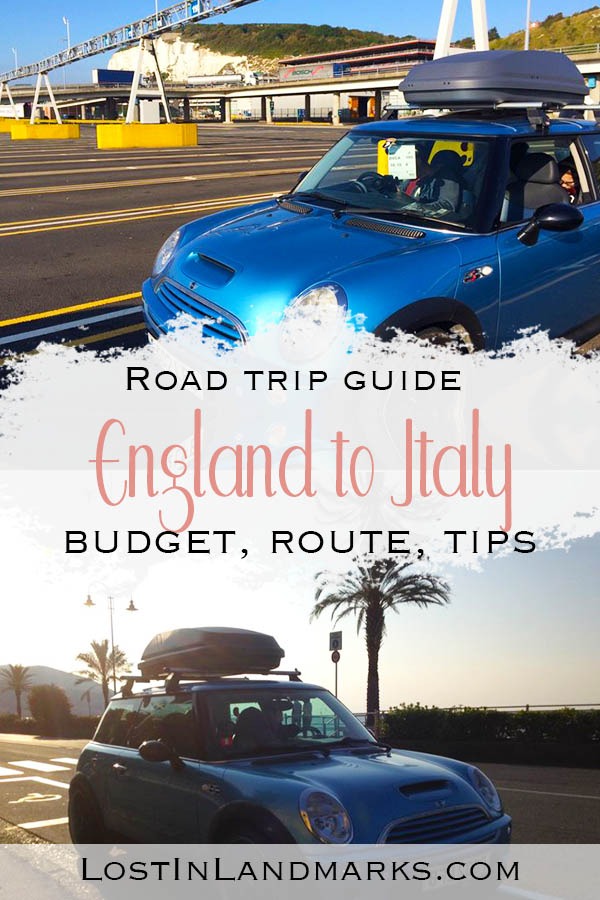 More rain and the best beach so far! 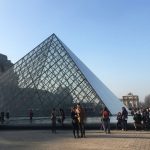 7 historical sites in Paris you must see