History lovers looking for WW2 sites in London will find a wealth of museums at their disposal.  It’s probably not the sole reason people will visit London, but if you enjoy learning about WW2 you’ll find plenty there to keep you occupied.  Having a son who loves learning about World War 2 we’ve almost always sought out places to learn more about it.  As well as museums you’ll find a number of memorials in the city centre dedicated to those who served.

These are by no means just for the history buffs amongst us but they can be great for those with just a passing interest and for visitors of all ages.  All of these places tend to have child friendly sections so don’t worry too much about taking kids – obviously use your discretion if your child is sensitive to war stories. 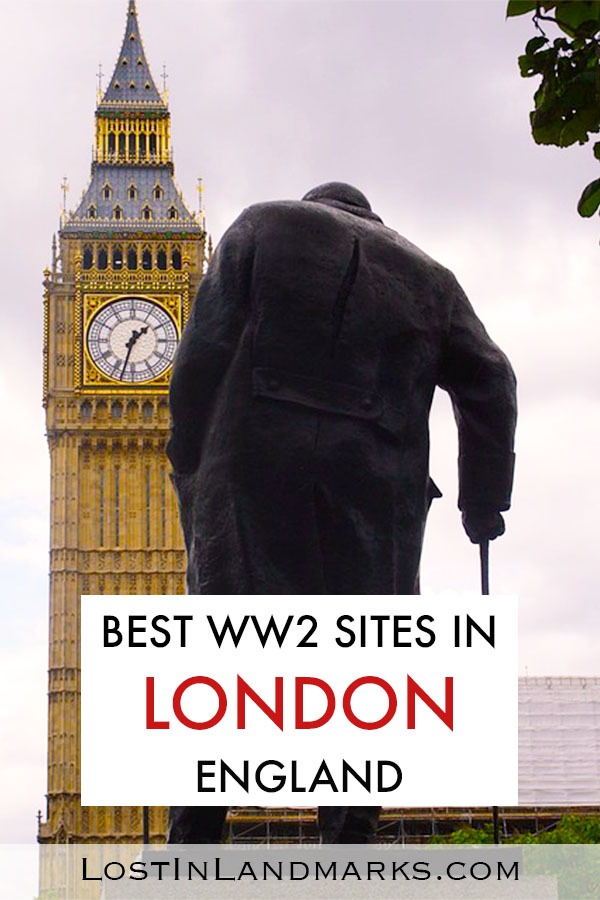 You’re always spoilt for choice in London when it comes to museums but even more so when it comes to WW2 museums!  Some of these are solely about WW2 and others might just have small sections dedicated to them

Consider the London Pass to save money – Both the Cabinet War Rooms and HMS Belfast are included in the London Pass and if you’re planning to do even more attractions than just those two then it might be worth considering purchasing this ticket.

Check the London Pass out here 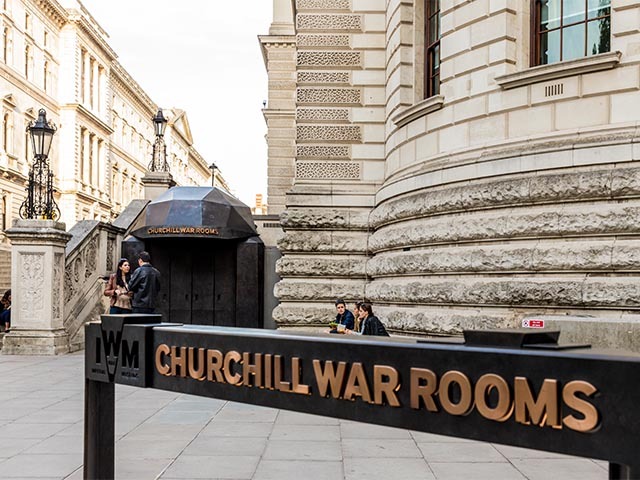 Number one on most people’s list to visit when coming to London is a visit to Churchill’s War Rooms.  It’s one of the few sites in London that has been preserved from war time.

Inside you can see how Winston Churchill, Britain’s Prime Minister for much of the war, ran the campaigns and strategised.  As it lies beneath the streets of London it also provided shelter for him and the workers from incoming bombing raids.  You cannot see the war rooms from street level, except from the entrance!

Leave a good couple of hours for looking round the museum and beware that it can get really busy in the summer months.  If you can, head there early or late to avoid the crowds and definitely buy your ticket online in advance to skip the queue. 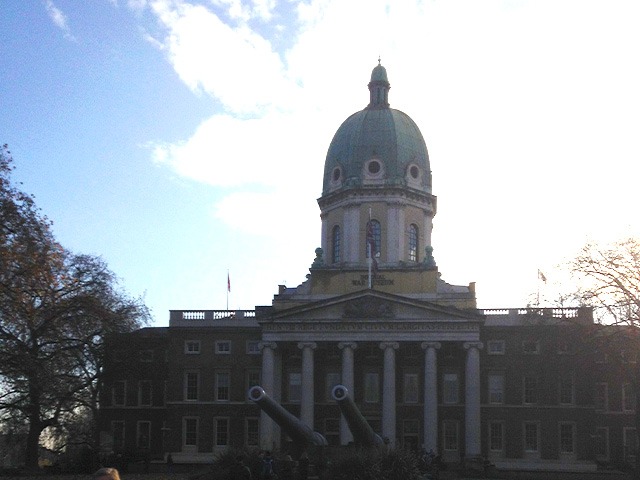 Just south of the River Thames sees the Imperial War Museum London and as the name suggests, its focus is entirely on war.  So that means that it’s not specifically just about WW2, although there’s plenty there to satisfy that if that’s your sole interest.

The building is pretty impressive and can’t be missed as it has 2 large guns (from the ships HMS Ramillies and HMS Resolution – both WW1 ships) outside.

The history of the Imperial War Museum actually goes back before WW2 as it was set up after WW1 as a place to house the artefacts from the time.  It originally was based in Crystal Palace but moved to its current home just 4 years before WW2.  It had to be closed for most of the war and even sustained some damage from bombs as well.

In the museum there are some permanent World War 2 exhibitions and some temporary exhibitions too so do take a look at the website before going to check what’s on. 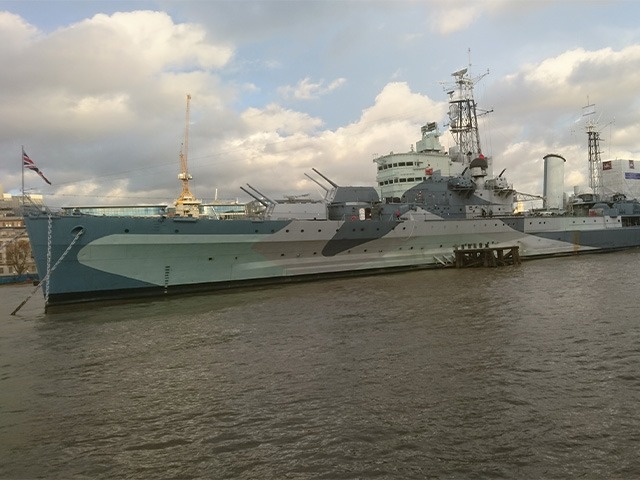 You can’t miss HMS Belfast, a WW2 naval ship moored on the River Thames and if you ever need to convince any travel companions to go with you on your WW2 museum trips just mention the amazing vies of London you can get from here!  You have Tower Bridge, the Tower of London and The Shard as your backdrop.

Of course, if you’re here to learn more about World War Two then none of that matters and what matters is what there is to see aboard!

HMS Belfast is one of only 3 surviving ships from the D-Day bombardment of Normandy shores and that period was the last time she fired a shot and is one of very few ships from WW2 left.

When visiting you can explore all the decks of HMS Belfast and get a feel of what life was like aboard.  There are also some exhibitions about the history of the ship and what she went through.

HMS Belfast is open every day (excepth the 24th, 25th and 26th December) from 10am – 6pm with the last admission beign at 5pm.   You’ll want to allow a good couple of hours for your visit at least.

The National Army museum is a free attraction that is located in Chelsea.  As you can imagine it covers solely the British Army and the history of it so we’re talking about a lot more than just the second world war.  If military history is something you find interested then I’d highly recommend a visit here.

There have many changing exhibitions at the museum so even if you’ve been before you’ll likely see something new.  Check their website to see what’s on.

The museum is based in Chelsea and the nearest Tube stop is Sloane Square.

While you’re there, why not visit the Royal Hospital Chelsea – home of the Chelsea Pensioners, veterans of the UK army – there’s a museum here also and it’s perfect if you’re interested in our Armed Forces.

Heading out of Central London and North we have the RAF museum in Hendon – another amazing free museum.  Like the National Army Museum it covers this branch of our Armed Forces and also covers times both pre and post WW2.

It contains hangars of planes and aircrafts, exhibitions about the history of the Royal Air Force and different events as well (some have admission charges).  Check the website to see what’s on when you plan to visit.

There are many planes on show from all countries, not just RAF aircraft.  Some examples of World War 2 aircraft on display are:

The museum is open every day from 10am -6pm (March – October) and 10am – 5pm in the winter (November – February).  Last admission is 30 minutes before the closing time.

As it’s outside of central London it takes around 30 minutes by tube on the Northern Line – the station you need is Colindale (this is a Zone 4 station).  There is also parking at the site if you’re coming from afar and want to take a car.  There is a parking charge.

WW2 Memorials and Statues in London

There are a number of memorials and statues in London dedicated to WW2.  Most of them are located within walking distance of each other so it could make a nice afternoon stroll if you wanted to take in them all. 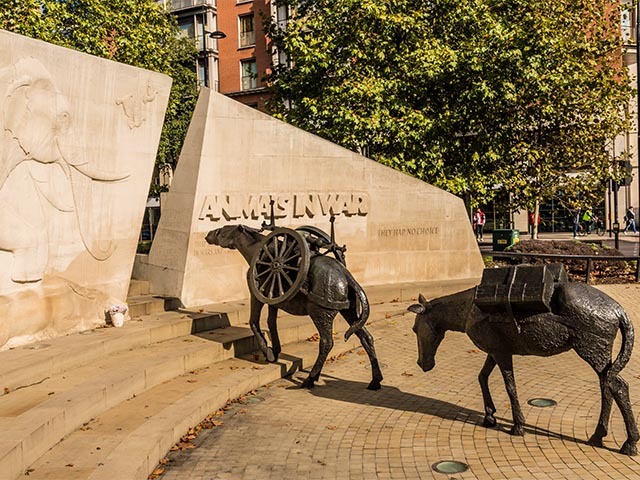 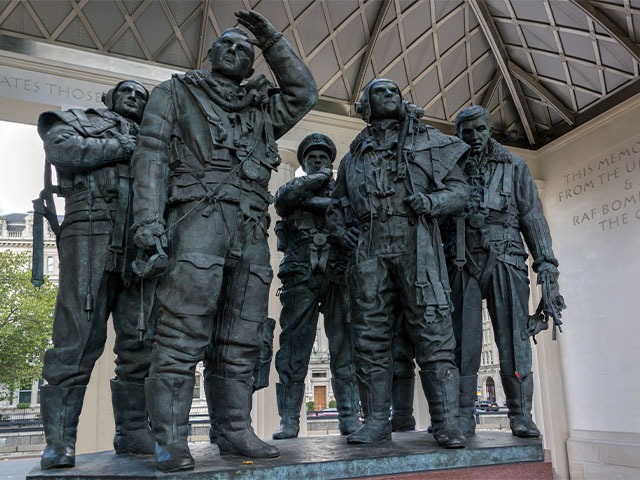 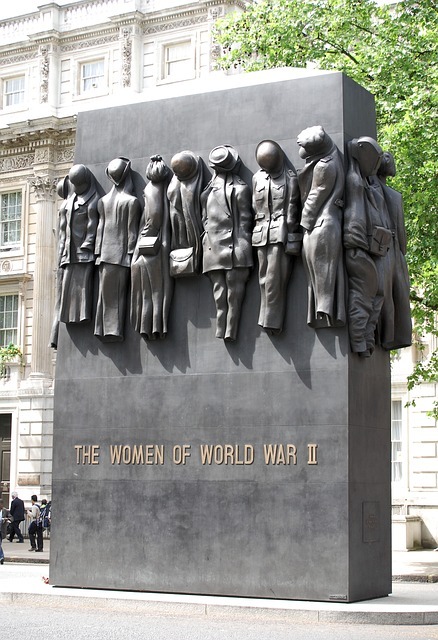 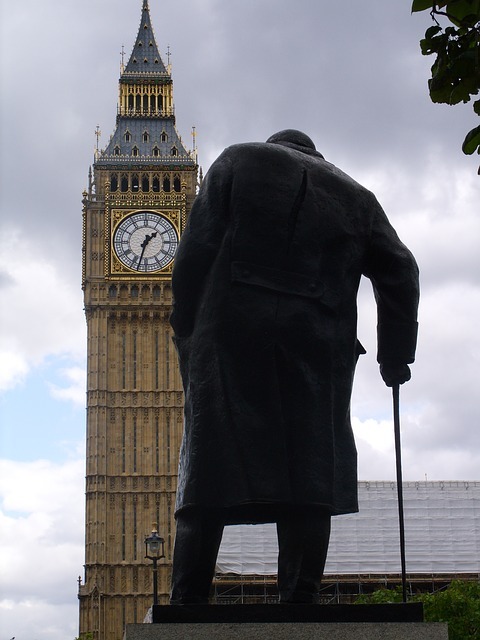 Monument to the RAF – Battle of Britain

Other WW2 sites of interest in or near London 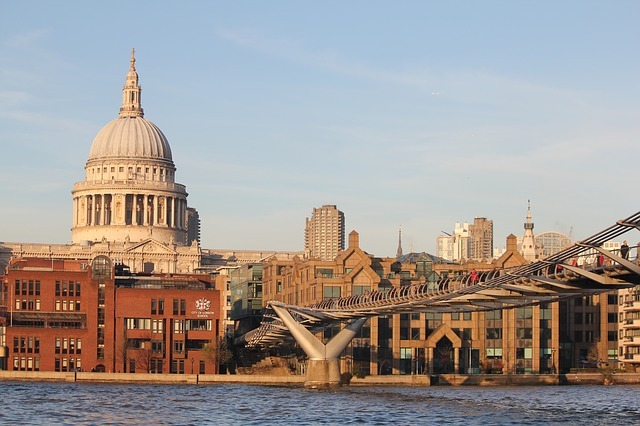 St Paul’s Cathedral was a huge symbol of hope during WW2 for Londoners especially during the Blitz.  It stayed standing, although was slightly damaged, even though many of the buildings around it had been bombed.

Inside the cathedral there is an American Memorial Chapel which is dedicated to the soldiers of D-Day.

There are some great walking tours that take place in London and they are really well worth the time.  Some cover the Blitz and some cover Winston Churchill and sometimes both.  If you want a knowledgeable guide to show you round then take a look at these: 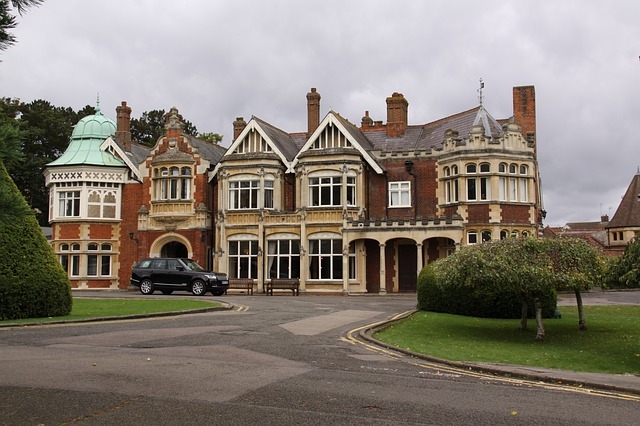 Although not in London itself it’s a short train journey from the city and so it’s worth including I think!  Bletchley Park is the location of where the codebreakers worked in WW2 and it had a huge impact on the course of the war.  It helped to intercept messages from both sea, air and land battles.  Unfortunately I’ve not made it to here first hand but I’m hoping to get ourselves there soon and I’ve heard some great things about the place.

There’s a lot to see in the museum and so well worth it for a slightly different story to be told of what went on in the war.  See their website here for more information.

Trains go from Euston Station to Bletchley and take around 45 – 60 mins.  I like Trainline for booking tickets and find it best to see what options are available.

Accommodation Options for London – If you want to stay close by to the majority of these sites then I’d definitely recommend the Central London area.  It does come with a more higher price tag but you’ll be able to take in most of these sights really easily.

Top End – if your budget allows and you want to stay in one of the best areas of London then check out The Berkeley. Even their most basic rooms are simply stunning – check them out here

Mid Range – The Park Plaza Riverbank is on the other side of the Thames to Big Ben but really close to all you’ll need. Some of the rooms have a view of the river and London’s Skyline too. Check the prices of this hotel here.

Budget – A little further away in Covent Garden but still very central is the Travelodge Covent Garden and not into hostel territory. I love Travelodge for no frills hotels and I use them ALL the time! See the latest price and availability here

London is really easy to get around so don’t feel like you need to stay in the centre, although it is convenient. 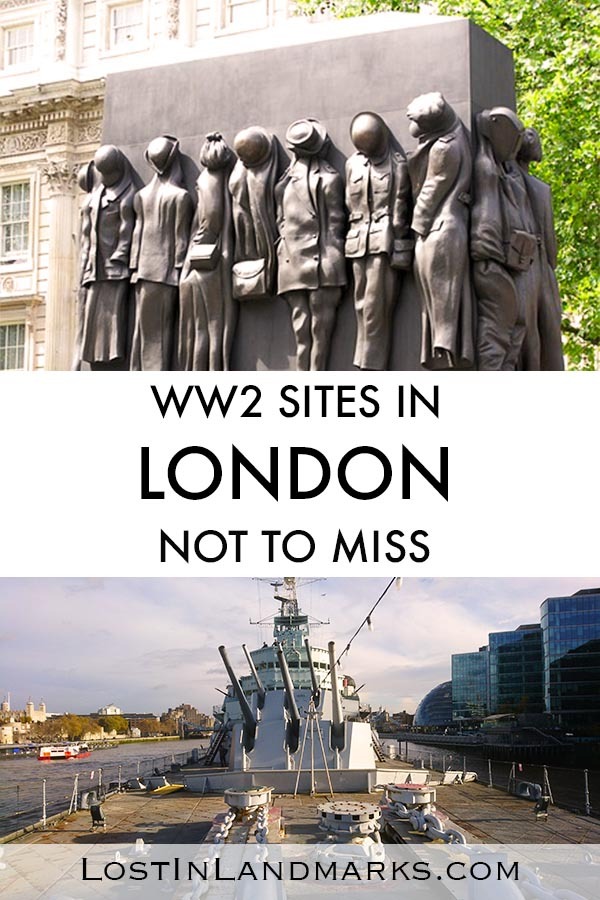 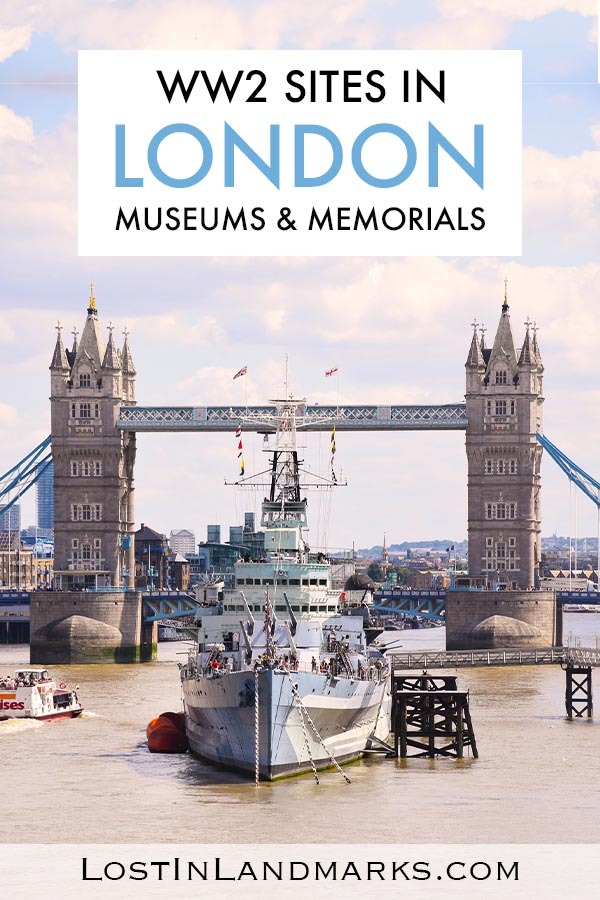 2 thoughts on “Best WW2 sites in London to visit”