As I may have mentioned a few times, this was our first trip to the USA and coming from the UK where we don’t have too many skyscraper skylines, we were pretty excited to see it while in Dallas which is a pretty big city.

Every time I saw pictures and videos of the city there was always this one tower that stood out – it had a ball on the top that was lit up at night time.  It was called the Reunion Tower Dallas and we decided we’d love to go up there and get a great view of the city.

As we were in downtown Dallas visiting the Sixth Floor museum we decided to make the most of the time (and make sure we didn’t need too many downtown driving trips!) by adding in a trip to the tower then.  It’s really close by, probably about a 5 minute walk away?  You don’t want much more when it’s as hot as it is in Dallas! 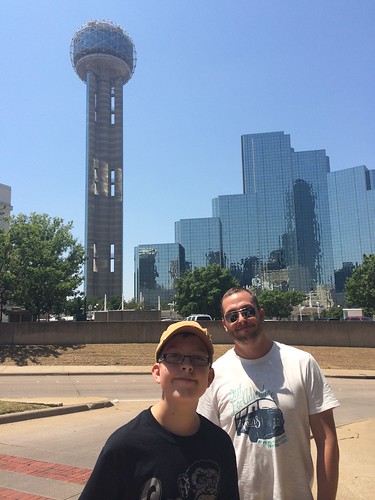 Facts about the Reunion Tower in Dallas

The tower was built in the 1970s with work beginning in 1974.  The first light show from the tower was in 1977 and was part of the holiday celebrations however it opened officially in 1978 – so only a little older than me then!

It’s one of the most iconic landmarks in Dallas and really gives the city a unique skyline view.  Over the years the light shows have changed with regards to special events going – quite often to do with the sports events going on!

The total height of the tower is 560ft (which is just over 170m for those of us who like metric measurements) and it’s where the name of the restaurant, Five Sixty, comes from.  It also makes it the 15th tallest building in Dallas (is that like saying I’m the 4th tallest in my family!!)  If you’re just going to the observation deck you’ll be at a height of 470ft (143m)

The restaurant does a full rotation once per hour so diners get the full 360 degree view over the city.

Budget note!  The Reunion Tower is part of the CityPass for Dallas so if you’re visiting a couple of places in the city you might find that a this works out much cheaper for you.  If you’re visiting them all you’ll save up to 38% – definitely worth checking out.

Visiting the Reunion Tower in Dallas

As you go in the tower there is a shop at the bottom with a whole load of souvenirs and a penny press (very important for us – small souvenirs I don’t mind the kids getting!) and after a quick bag security check you wait for someone to take your picture against a green screen.  Normally I hate these things as I hate the pressure to get one afterwards, but they had a way to get your picture on social media for free and you got a copy emailed back to you too which I thought was kinda cool.  Maybe this is the way forward with these things, I’ll admit it’s been a while since we’ve done many touristy things!

The lift that takes you up to the top of the tower takes a grand total of 68 seconds and feels so smooth.  You get to see outside as you go and get a fab view!

Once up at the observation deck, called the GeO Deck, you can use the kiosks to share your image that was taken below.  There’s a few backgrounds to choose from, but I do like the evening shots with all the lights!  The deck is air conditioned and full of touch screens that are really accessible to all.  You can search and find out some of the history of the tower or use it to find out what you are looking at outside.   It was great for my older kids, but equally I think it would be great for little ones too.

The views were spectacular.  I could have spent forever just looking at it and trying to work out what I was seeing.  I couldn’t believe how spread out the city was, something that’s very different to a crowded Britain, and how far away the big sports stadiums at Arlington were.  There was also an outside area where you can look through telescopes to get closer to the landscape too.  All included and no extra quarters needed! 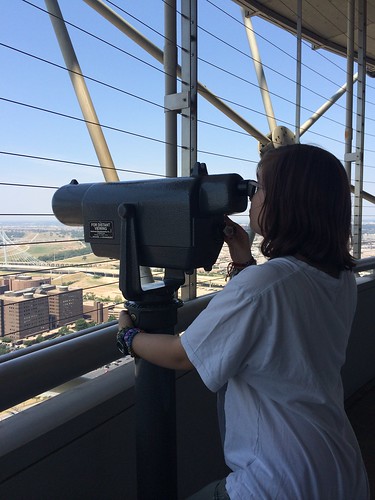 We spent ages being silly and taking selfies – although I was always a bit worried I was going to drop my phone!  I think I need a wrist strap like my camera has 😉 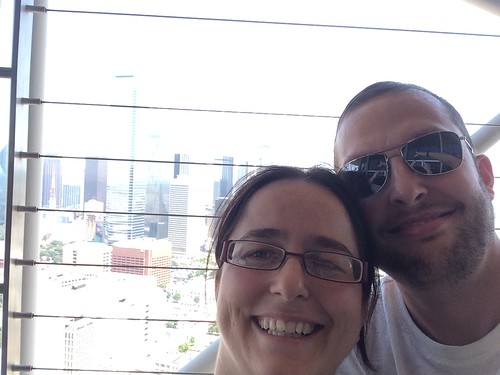 Overall, it was simply stunning up there and we all loved it.  I’d highly recommend a trip to the top.  There are food options too in the restaurant but also a cafe if you’re not wanting to properly dine so maybe we can add that in next time! 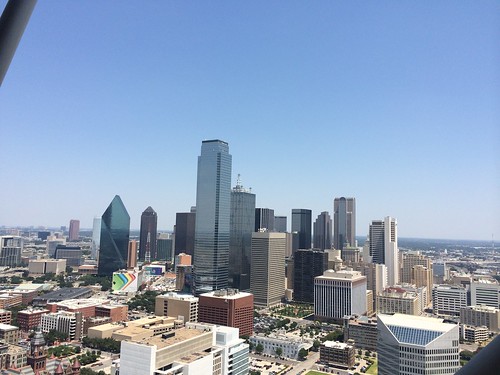 The best way to get tickets to the tower is by using the CityPass which, if you’re visiting a few Dallas attractions, will make it much better value.  It also includes the Sixth Floor museum (highly recommended if you like history) and the George W Bush Presidential Library and Museum too.

Disclaimer: we were given complimentary tickets in return for writing about the Reunion Tower.  This hasn’t affected what I thought of it.

Where to stay in Dallas

If you’d like to be near to the Reunion Tower and many of the attractions of downtown Dallas then there are lots of hotels that would suit.

Directly next to the Reunion Tower is the Hyatt Regency hotel – you really can’t get any closer!  Latest prices can be found here.

If you’d like a bit more of a homely feel then Airbnb is a great option – it’s what we did, although we weren’t in the downtown area. 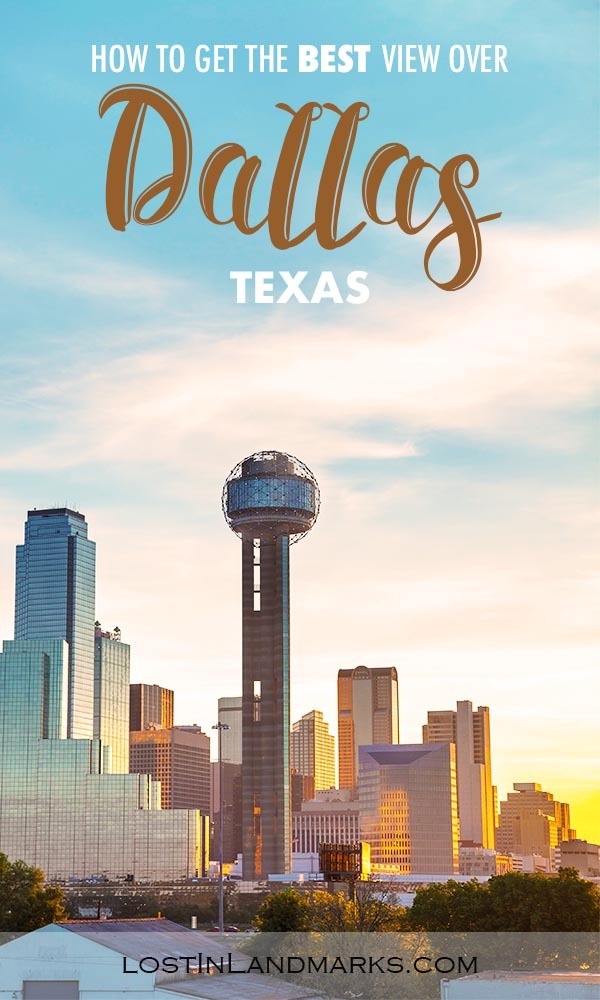 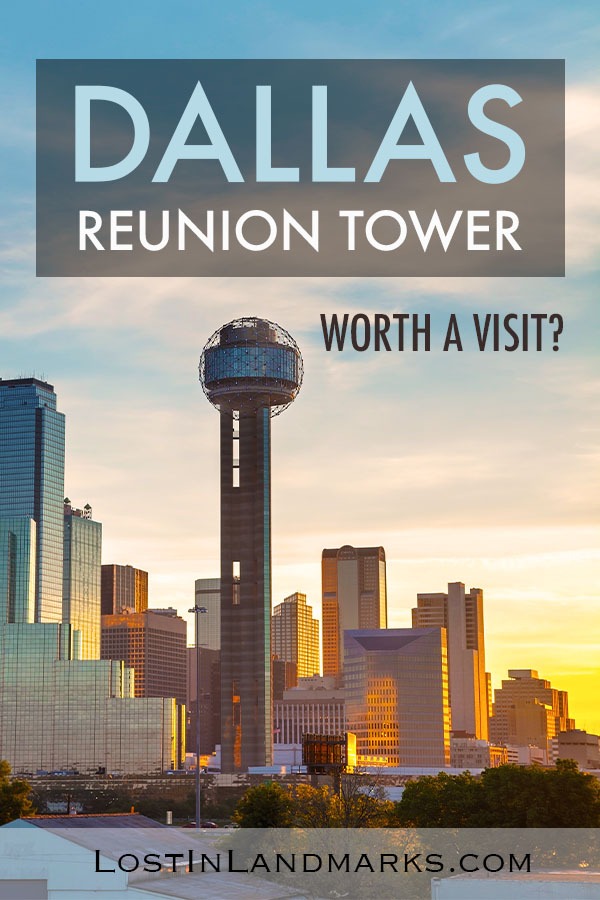