It was my third trip to the Netherlands and I was so determined to see windmills this time.  It was beginning to feel like perhaps windmills were just there for tourists in the touristy areas and maybe not part of real life for the Dutch.  As it happened, I saw many windmills on my 3rd visit to the country, from sole village examples to working flour mills to the impressive collection of them at Kinderdijk.  I needn’t have worried at all and I possibly just had my eyes closed the first two visits!  If you’re heading to the Netherlands and have your heart set on visiting some traditional windmills then I definitely recommend a day trip to these ones and if you do I hope this guide to visiting the Kinderdijk windmills is helpful to you.

Kinderdijk is in the south of the Netherlands, about 10 miles or so from the city of Rotterdam – it’s a great day out to enjoy the countryside of area and to take in the history of how the country manages the water in this land.

Why does the Netherlands have so many windmills?

In a nutshell, the Netherlands is a really flat country and this makes it perfect for harnessing the natural wind power through windmills and using it for other means.

The Netherlands as a country is not only very flat, but it also lies below sea level.  Because of this, the Dutch have been using windmills as part of a complex way of draining the land and keeping it dry for hundreds of years.  Before the windmills of Kinderdijk were in place the land you’d have seen would have been a bog.  By transferring the wind energy to the movement of Archimedes screws, pumps and other machinery the windmills can be used to displace massive amounts of water.

Some Dutch windmills are also used for grinding flour as we probably more traditionally think of them but the windmills at Kinderdijk are not this kind and most of the country’s mills were used for irrigation and water management. 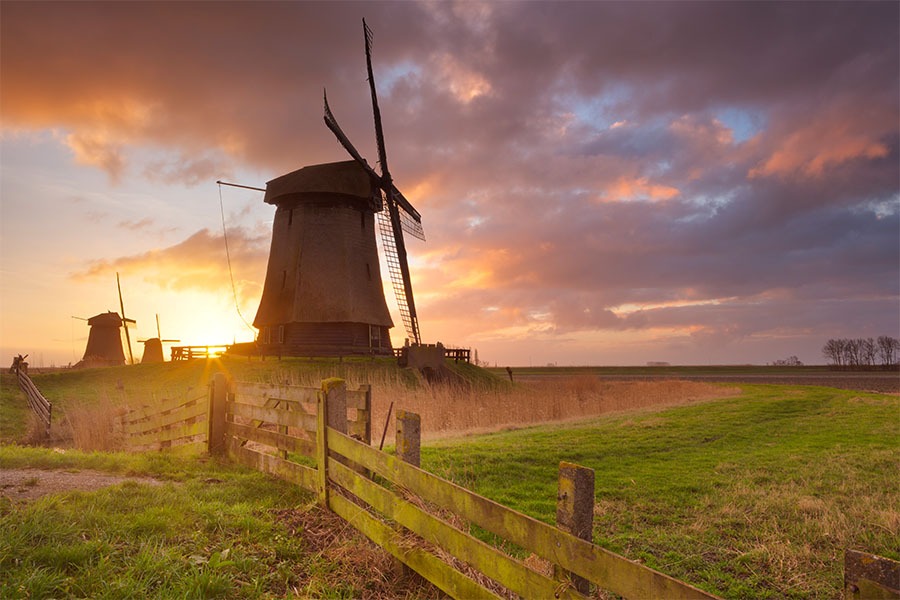 A brief history of the Kinderdijk site

Kinderdijk is a UNESCO World Heritage site and way before there were windmills there and water management in place the area would have been a complete marshland of peat bog.  People would come to the area to fish and hunt but it would all depend on the sea levels and you definitely wouldn’t have been able to farm or build there.

As time went on some people wanted to create settlements and farm the land which was actually incredibly fertile.  This meant that water management was essential – the lands would be at the mercy of the weather, tides and sea levels if not.  The Dutch weren’t to be put off though and from as early as the 13th century people did just that – managed the water and what we see now is the legacy of that time.

As technology has advanced so has the ways of managing the land of the area.  The windmills that you can see now at the site are from a much later date – they were built in 1738 so actually still an impressive age but even they aren’t used any more (although they are an important back up and can still be used if needed).  Nowadays they use modern pumping houses and it’s important that they keep going because as soon as they decide to stop the land will be taken over by water!

Why is it called Kinderdijk?

The name means Children’s Dyke and the story about how the name came to be is a legend about the area.  It flooded badly in 1421 after a storm and a flood, called Saint Elisabeth’s flood, devastated the area and caused many deaths.  The legend goes that one of the survivors found a child in a floating cradle after the storm with a cat helping to keep it afloat.  The child survived and it is thought that the name of the area comes from this.

What can you see at Kinderdijk?

There are 19 windmills in the area and a variety of walking and cycling trails to explore.  This part of the country is simply stunning and really feels special.  It’s free to walk around the area but they charge for going in to the museums – on our visit there was a heatwave and we couldn’t face the museums too and just enjoyed ice cream from the cafe!

As well as simply exploring the wonderful scenery there are some windmills that operate as a museum which tells the story of how the site came to be and how they manage the water in the area.  One of the old windmills you can look around is older than most of the others – the Blokweer Museum Mill is a little different in looks and is over 100 years older too.

You can also explore the more modern, although from 1868, pumping station – a great look at how the technology has changed over the years.

Ticket prices (accurate as at November 2019):

It’s cheaper to buy tickets in advance on their website but you can also buy on the day.

Tour boats are another thing that you can enjoy and gives another perspective to the area – slow down and just enjoy!  This isn’t included in the admission price and is extra (currently €6 euro per adult and €3.50 for children). 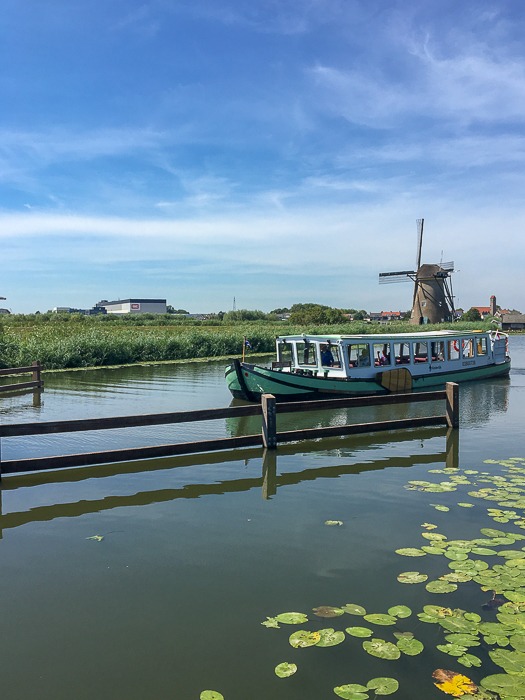 There is also a small gift shop and cafe area by the entrance and car park too.

What’s the best time to visit

Kinderdijk is open all year round and there are benefits to visiting in every season.  Enjoy the winter there and you may be lucky to get a snow day there and in the summer, like when we visited, you’ll be able to enjoy the sun on your face and the dashing of dragonflies around the water.

Parking at the windmills was easy and even though it was August when we visited and quite busy, we were able to be parked with no problems.  There were parking attendants helping guide where to go and accepting the money for parking which was €5.  They do only have a small amount of parking so perhaps we were lucky when we arrived.

On weekends and Dutch public holidays there is additional free parking at the nearby Royal IHC Shipyard which is a small walk away.

Tickets can be bought easily online or from the site when you arrive.  Online has the benefit that you know there are places available, especially in busy times.  See here.

Ticket prices (accurate as at November 2019):

How to get to Kinderdijk

Kinderdijk is easily reached from most of the Netherlands since it’s such a small country but it’s based in the south so only a short drive from any of the towns and cities down there.  It was only an hours drive from where we were in Utrecht and from Amsterdam you’re looking at 1.5 – 2 hours drive.

Rotterdam is the nearest city to Kinderdijk.  It is about a 30 minute drive, depending on where you’re based.

Public transport is also easy from Rotterdam and a waterbus is a great way to arrive at the windmills.  You can get a combination ticket for both the waterbus and the site which is currently €16.50 per adult (correct as at November 2019).  Find more information here.  It can also get you there from Dordrecht as well.

From Amsterdam it’s a little longer to get there – about 1.5 – 2 hours by car but we found the roads to be really good in the Netherlands.

If you want to visit and are based in Amsterdam but you didn’t want to drive or navigate the public transport then a good option would be a private tour like this one.

AirBnb (plus get money off your booking)

Tours to Kinderdijk from Amsterdam 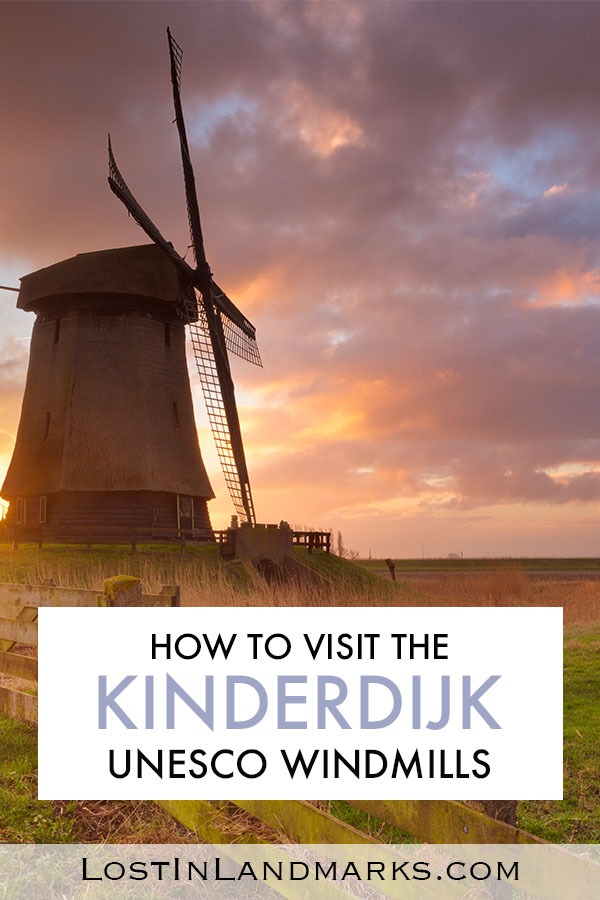