New York City is an amazing place to visit and even more so with kids.  It’s such an iconic place, somewhere that we’ve all seen at some point on the tv or in movies and to be there in real life is something else!  There are many things to do in New York with kids and contrary to what you might think not all of them will break the bank!  As you know I do like my free activities so I’m kicking off this list with some free attractions you can take advantage of with kids from toddlers to teens!

8 free things to do in New York with kids

The first on my list was one of my favourite things to do on our family trip to New York and it’s great for kids of all ages.  It’s simply the passenger ferry that goes from Battery Park on Manhattan to Staten Island.  It’s not fancy, it’s not plush, it’s like a bus on the water! 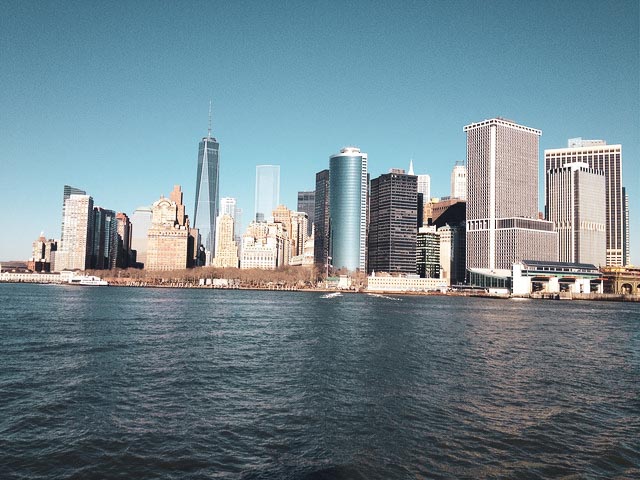 But, it’s free and it runs constantly through the day, so whenever you manage to get there you’ll be able to take advantage of it.

Why go on it?  Well it’s a free way to see the Statue of Liberty up close.  Not quite as close as other tours or visiting the statue itself of course, but it’s pretty good.  If you’re on a budget it might be all you need.

It’s also awesome to see the skyline of lower Manhattan ahead of you as you ride away.  The first time we did it was at night time and it was a spectacular sight!

The High Line is a public park that was built on an old elevated railway line and that has now grown over and become a beautiful addition to Manhattan.  It’s a lovely place to take a walk and get al alternative view of the city. 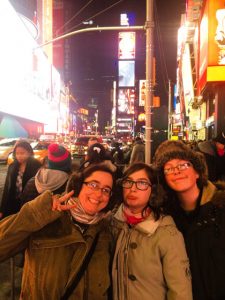 Times Square is bustling, but you really shouldn’t miss it.  As a spectacle it’s one of a kind and there’s really nowhere that’s quite like it.

Aside from taking lots of photos there and enjoying the atmosphere, there’s lots of flagship stores around to wander through.  We liked the M&M shop there (especially as we’d also been to on in Las Vegas and London).

Walk across the Brooklyn Bridge

Another of my favourite things to do was to walk across Brooklyn Bridge.  It’s free to do so and as you walk along you get some fantastic views of the skyline.

You’ll also be able to learn a little of how it was built through some of the information boards dotted along the walkway.

Central Park is huge and really is a breath of fresh air away from the hustle and bustle of the streets.  There’s lots to see for free with plenty of nature around.  It’s just a really nice place to be able to run and let of steam which you can’t really do on the streets of Manhattan!

Ok, a toy store might not seem a logical free thing to do, but bear with me!  If you’ve ever seen the film Big then you’ll want to go here and show your kids the giant piano that you can play.  It’s all free and a really fun thing to do.

There’s also plenty to see in the toy store if you have deep pockets or an iron will to say no!  😉

One of the main train stations in New York is a feature of many films and so we had to visit.  It’s obviously free to get in, it’s a working train station after all and it’s a really nice building to look round.

I love wandering around different neighbourhoods of the city and how they change fairly abruptly as you get there.  China Town and Little Italy are quite close to each other and gives another perspective about New York that’s a little different from the rest of it.  Yummy food too!

Other kids attractions on NYC

Within Central Park is a zoo which sounds crazy, but yes it’s there.  If you’ve ever seen the film Madagascar then you’ll know that it’s the zoo that the animals were part of.  Unfortunately no Alex the lion here though!  It’s a really reasonable price as well at $12 for an adult and $7 for a child. 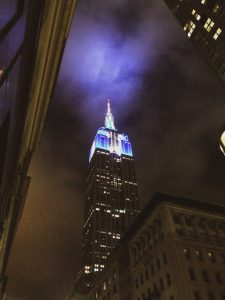 Everybody has seen it – what was for a long time the tallest building in the world!  Of course not any more, but still a huge feat of engineering.  You can go to the top, for a cost, and get an amazing view of the city.

For an alternative skyline view you could always go up to the top of the Rockefeller Centre.  The advantage of doing this rather than the Empire State building is that it’s cheaper.  You’ll also get a view of the Empire State Building itself which you won’t get if you’re stood on top of it!

Visit the Statue of Liberty

If you’re not content with just a free look at Lady Liberty from the Staten Island ferry you could go on a trip to Liberty Island and see her up close.

With the ferry ticket you can get a self guided audio tour to make the most of your visit.

Money saving tip! – If you have a lot of places in mind to visit then I’d suggest looking at the New York City Pass which can save you up to 42% on buying tickets individually.

Travel in a yellow taxi

Self explanatory really – hailing a taxi and having a ride is quite a fun thing to do!

Rent a boat to sail at Conservancy water

A large expanse of water is in Central Park and you can either bring your own remote control boat or rent one.  It would be a lovely way to spend a few hours there if the weather is good.

Go on the carousel in Central Park

While you’re in Central Park why not seek out the Carousel as well and have a ride on that!

Check out the museums for kids below too…

While many of the ideas in the kids section are great for toddlers, here’s a few more ideas just for them.

Go on a horse and carriage ride at Central Park 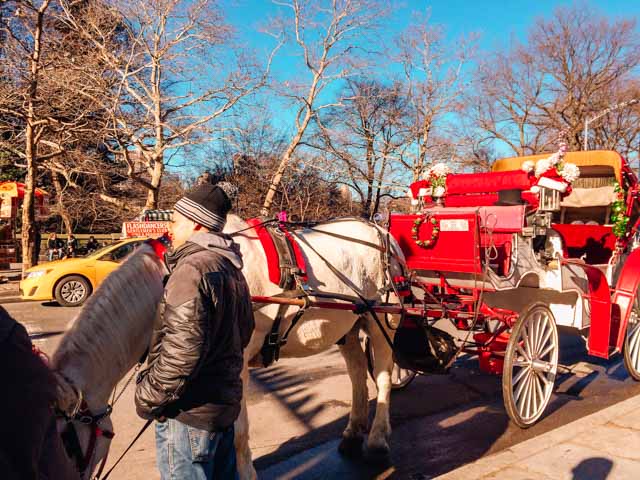 One way to create a lovely memory is to take a horse drawn carriage ride around Central Park.  Perfect idea for toddlers and kids.

Behind the New York Public library is a great park and playground that will be fab for letting of steam and running around a bit.  Bring a picnic and make a day of it!

A trip to the zoo – Bronx or Central Park

As well as the zoo at Central Park there’s also a zoo in the Bronx which is worth a visit.  Wednesdays are a really popular day to go as it’s a ‘suggested donation’ day so could be a nice free or cheap day out with your toddler!

What to do in New York with teens

New York is great for teens.  Even if they’re not in to shopping like mine, they’ll still have an excellent time!

Take in a Broadway show

A broadway show is an excellent thing to do in New York with teens, although can be a little on the pricy side!  Choose cheaper times of the day to go for a more budget option.  Good shows for teens would be Wicked or maybe the Lion King.

Eat the best pizza around

We still talk about the pizza in NYC.  Yes, it’s that good!  I can’t recommend a place, because it was just a small pizza joint, but our favourite was near the Chrysler building and it was $1 a slice.  You can’t beat that!

Whatever your favourite genre of movies, there’s likely been something set in NYC.  A fun thing to do is to visit some of the locations that films were set in.  We loved finding the Ghostbusters buildings and also the hotel from Home Alone 2.

You might even be lucky and stumble across some new films being made!

Next to Central Park is an amazing building that looks really state of the art, slightly out of place and yet fits in perfectly!  It’s the 5th Avenue Apple store and is worth going in just to say you’ve been there!

The place where the world trade centre once stood is a sobering place, but one that is good for teens to see especially as for most of them they’ll only know a life post 9/11.  There is a museum to visit as well, although we didn’t do that.

If your teens like rollercoasters then a visit to Coney Island is a must.  It’s a classic rollercoaster park with some amazing rides and apparently is the birthplace of hot dogs!

Ellis island is the place where immigrants would have landed when they arrived in New York and now there is a museum there that would be a great place for learning about the immigrant heritage of the United States.

Museums in New York for kids 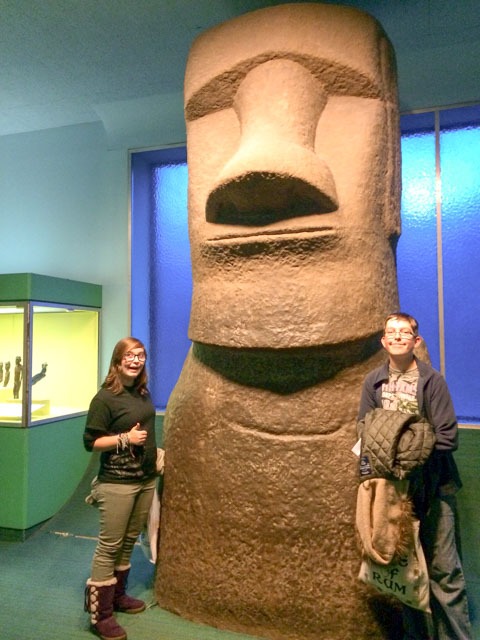 We were excited to go here as the kids had seen it in Night of the Museum.  Unfortunately it’s not anything like it inside (well we knew that things wouldn’t move!) although Alex loved finding Dum Dum, one of the Easter Island heads (although it’s not a real one – go to the British Museum in London to see one there!).

It’s a suggested donation museum so can be free, but you still need to queue up for tickets and that did take quite a while when we were there so just a heads up.

If you’re looking for fun hands on exhibitions then this small museum is a great place to come.  There’s water play and many more really fun exhibits that are suitable from a very young age.  Find out more here.

If you’re there at the right time, there’s free entry on the first Friday of every month (I think in the evening but best to check with them).

The New York Transit museum is in Brooklyn and is an excellent place for any kids who love their vehicles!  It focuses on the subway cars and has many vintage exhibits.

Children’s museum of the Arts

This is an art museum dedicated solely to children.  They have classes and drop in activities going on – check out their website for more info here.

They have a ‘pay as you wish’ day every Thursday from 4-6pm. 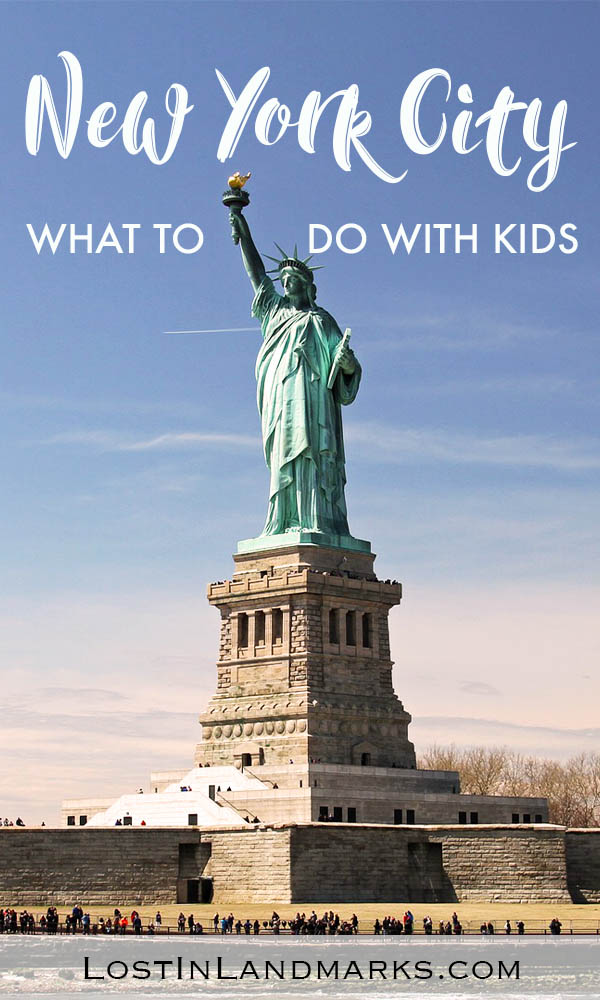 1 thought on “Things to do in New York with kids”