We had wanted to spend a couple of days in Holland, but J’s eye problems meant that we spent an extra night in Germany and had to strip a day from our Holland idea.  We did manage to spend one night there, in Gouda,  which was really nice especially as I’d never been to Holland before.  Actually I had transited through the Amsterdam airport before and I remember being amazed as we flew over the country and I could see just how flat it was.  I knew it *was* flat, but seeing it from that perspective was pretty amazing. 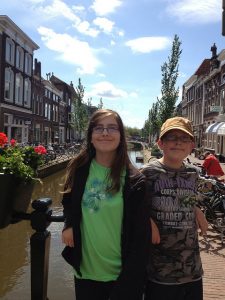 We arrived in Gouda on a Sunday and fully expected nothing to be open.  Throughout France and Germany the shops completely close down on Sundays.  Coming from the UK it was actually quite refreshing, once we got our heads round it.  It was like our childhood when it was a family day and not dictated by shops.  So when we were walking round we were surprised to see not only a market on but all the shops open too!  It was lovely weather, a lovely little town with canals, bikes, and wonderful alleys to explore.  We’d have stayed and explored the day after had we not been woken at 6am by workers in the car park we stayed in.  As it was, we headed to our next and last country before heading home – Belgium.

As soon as we got close to Belgium the pace changed, the traffic became so much more full on and heavy and we just didn’t enjoy the driving as much.  Our days driving were shorter, and it was just as well!  We chilled out in a stop nearish to Brussels so we could have a day trip in to the capital the next day.

Alex had expressed a wish to go to Brussels since she realised there was a Smurf shop there!  We’d not done too many big cities due to them being hard to negotiate, stay in, and then get around.  Expensive too.  But Brussels seemed doable as a day trip and really, none of the kids had asked to go anywhere specific so it seemed a nice thing to do.  We parked somewhere near the Atomium in the outskirts of Brussels at a cost of 5 euros and took the metro in to the city.  We got a 10 trip ticket which was 13.50 euros and worked for all of us.  I wasn’t very well prepped for going there, I had no idea really where things were but eventually we managed to find a tourist information to ask.  I got completely confused by someone initially speaking to me in english rather than another language and happened upon a nice little free exhibition on Brussels and the european language.

I managed to get us lost quite a bit, but we eventually found the smurf shop – woohoo!  Spent some money and had a very happy daughter 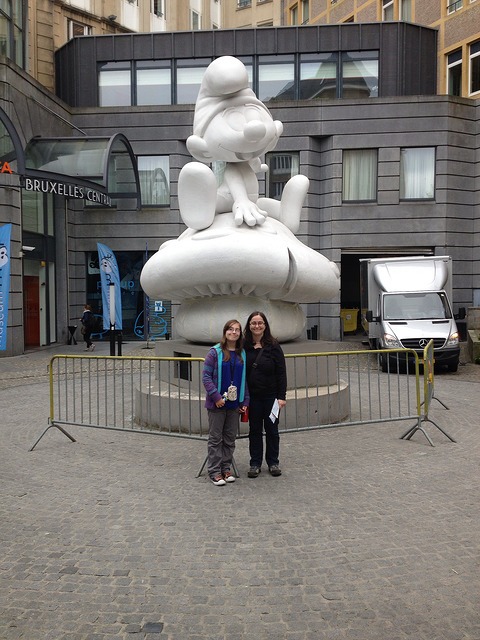 Brussels is really pretty, really gorgeous buildings, but also incredibly touristy.  We’d not done too many big cities so it was quite a shock to see so many shops dedicated to spending on little trinkets and specifically a little boy peeing!  The kids were so bemused by the Manequin Pis!  I’d have liked to have spent more time discovering the non touristy bits 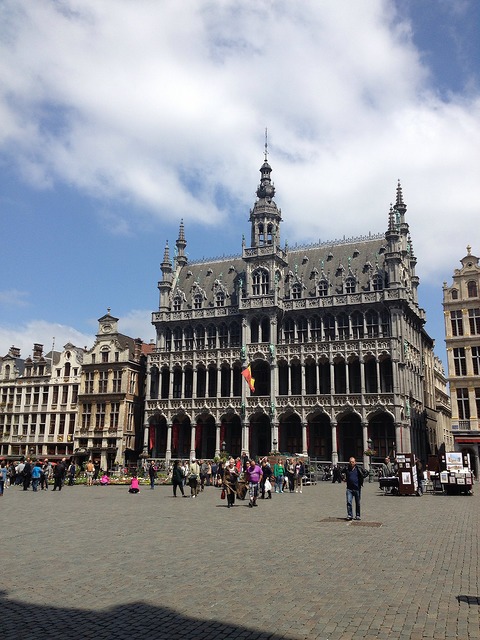 Finishing up in Brussels we battled the traffic once more to get to Ypres and to be there in time for the ceremony at the Menin Gate.  It had been high on my wish list of places to go.  Not the most cheeriest of places to take the kids, but highly moving and sobering.   Every evening at 8pm there is the Last Post ceremony and we were there in time to listen to it.  Standing next to so many others who had come to listen and pay their respects.  An old woman and man were next to us and I had a lovely chat with them about it all. 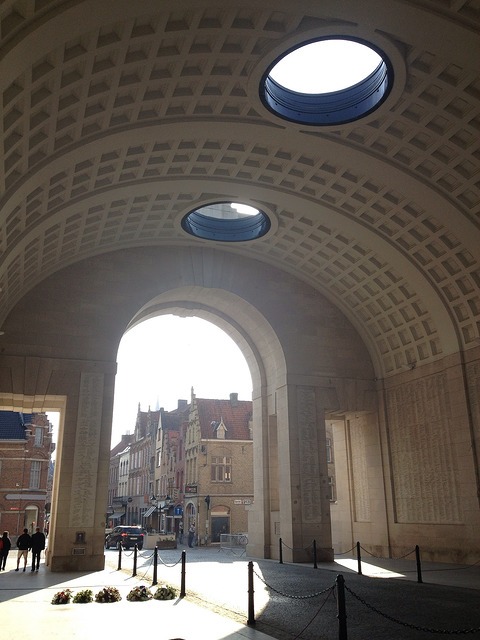 There are over 54,000 names of soldiers missing on the memorial.  Just immense.

Our last full day on the continent saw us heading back to France, but before hand we visited the Tyne Cot war cemetery which I actually think I have been to once before on a school trip.  Many of the soldiers who died in the Battle of Passchendale are buried here and James’s great grandad fought and was shot here, but thankfully survived.  So many lay there.  So many perished.  Such a poignant and sad place, but also a nice visitors centre/room with interesting letters and artefacts about the battle. 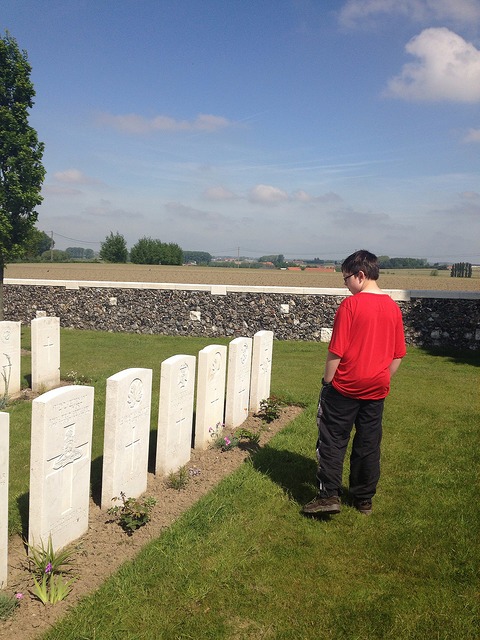 Thinking and taking in the enormity of it all.

We then headed to our last stop in mainland Europe – sniff!  It was about 15 minutes away from Dunkirk where our ferry was the day after and it was by a beach!  I had missed the sea so much so it was great to see it again.  We had some lovely, if bracing walks on the beach and discovered old German WW2 bunkers that James and the kids investigated.  Europe said farewell with a spectacular sunset and sunrise that seemed to all at once make up for the monotony of the grey German days! 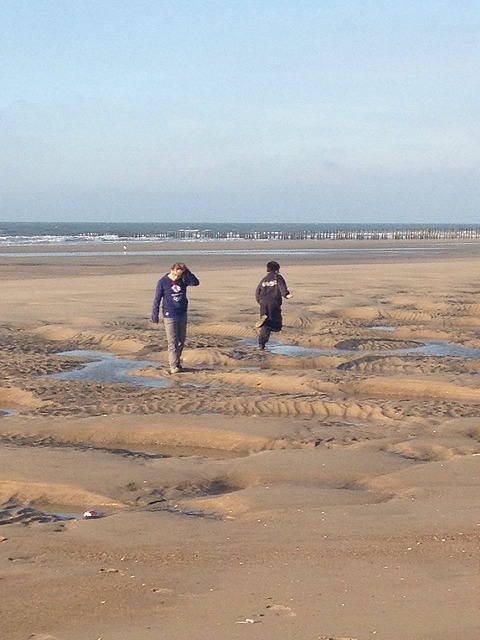 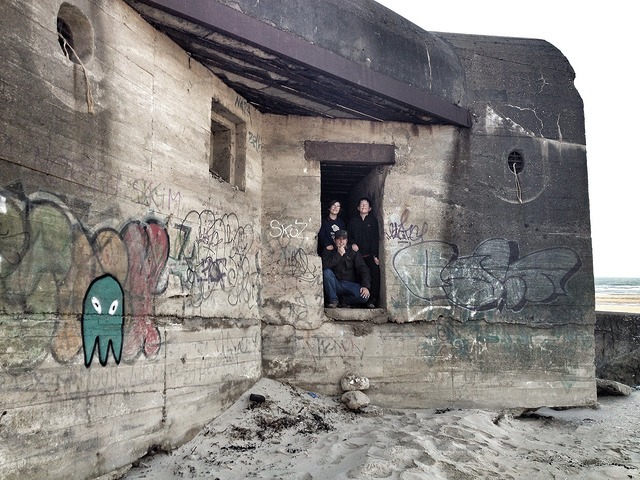 We were sad to finish this section of our trip, but excited to get into England and explore areas we’d not visited before there. 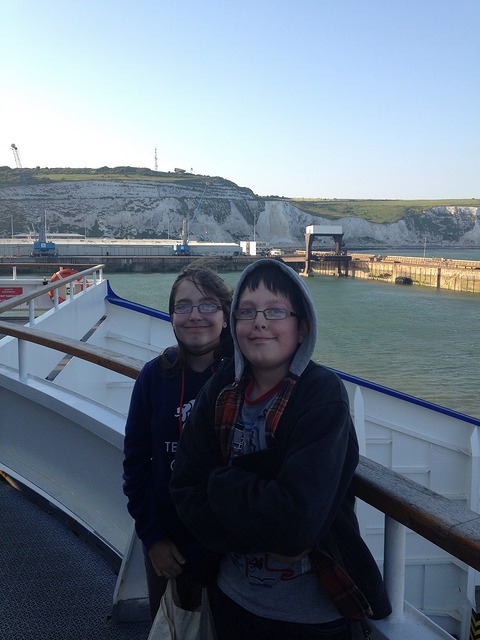 Hello again England!  Weird to be home, but not actually going home!