Well, we did it.  We finally saved enough to buy ourselves a campervan.  I can’t quite believe we have one, probably because she’s not staring at us every day as we’re keeping her on my mums drive for now.

Anyway, here she is.  She is a 1988 Fiat Dethleffs Globetrotter.  She’s a little bit old, she’ll be 25 next year to be exact, but I think she’ll do the job just fine. James says mechanically she seems fine and her bodywork is pretty good too.  The interior is, um, a little less good! 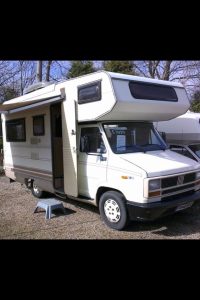 (I forgot to take a photo of the front, so this is from the ebay listing and we paid less than that!!) 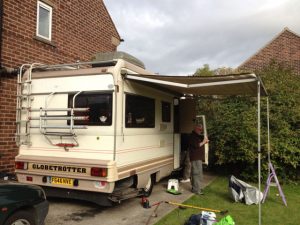 The back.  We tested the awning yesterday, it’s not in great condition, but should work well enough for us as a little bit of shelter when we’re on campsites. 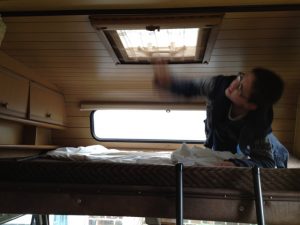 This is the bed above the cab and will be where Marcus sleeps.  It’s huge!  He has the biggest area I think. 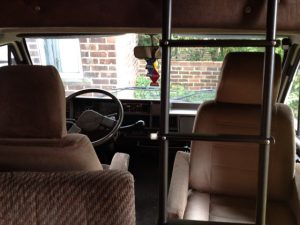 The drivers area (it’s a LHD – was scary following James home in it as he kept driving it way into the centre of the road until he got used to it!).  the passenger seat turns round. 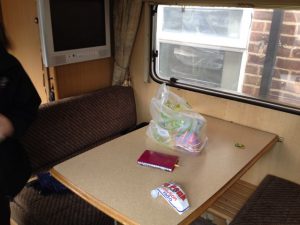 The middle area which will be where we’ll eat and where James and I will sleep.   Also where the seatbelts are and where the kids will sit when travelling. 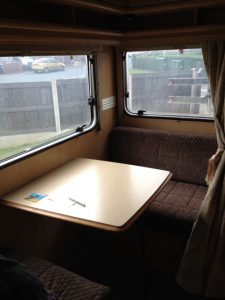 Another bed at the back for Alex.  She has a curtain she can pull round for privacy too 🙂 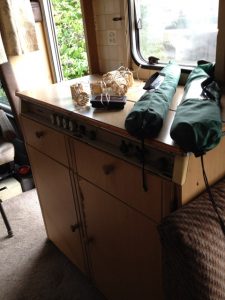 The kitchen.  There is a hob and a sink under the work surface.  There is also a fridge behind one of the cupboards.  This was my sticking point, as I wanted an oven or at least a grill and it doesn’t have one.  James thinks we’ll be ok without, but I think I’ll plan to get a Cadac or similar to give us more options especially on a campsite. 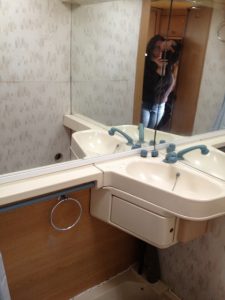 Bathroom.  No toilet fitted in, just a porta potti.  Haven’t tested the shower yet. 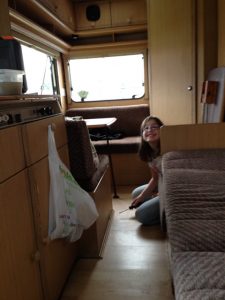 Alex trying to clear the floor up.  There was some horrid brown carpet down which we took up yesterday.  Underneath is some laminate flooring, which hasn’t been put down very well, but might be useable.

So, the interior is pretty horrid.  The laminate is coming off the cupboards, there are stupid hooks in the walls in places and it just looks really tatty and dark.  We took up the carpet, took down the curtains and removed any crappy additions yesterday and it looks so much better already.  I still have plans to paint inside and recover the cushions, so I think it will look much better in time.  But really, it’s all just cosmetic and although I will do it because I want to, it’s nothing major.

I can’t wait to show the after photos.  Might be a while yet though!

Cheap family accommodation – how we travel far on a budget!

8 thoughts on “Our home for next year!”