I don’t often (actually never really) blog about blogging here at Lost in Landmarks. Which is a bit of a shame because it can be really interesting to hear about how others do the whole blogging career.  I’ll definitely have a think about changing that and adding some more casual posts here about life as a blogger.

Last week I was invited to attend a blogging event in Manchester run by IceLolly.com and I wanted to do a write up of the day.  If you’re finding this post in the future and you’re planning to visit one of IceLolly’s events then I hope you’ll find the post informative and I’ve added some tips for newbies to the whole event scene too.

IceLolly.com Blog At The Beach event

Although I have been blogging for years now (I started my first home ed blog in 2005 I think?) I’ve never been to a bloggers event before.

I was definitely a bit nervous on going to the event and I’ll be honest, I nearly didn’t go at least 10 times on the day itself.  This was a mixture of just bog standard nervousness but also some real deep worries I had about if I was ‘enough’.  I have just turned the corner into a new decade, feeling a little like I am too old for this caper and worried about how I look.  I also knew absolutely no-one which is a side effect of my introversion – I have some attempts at being sociable on social, but I tend to fail miserably at keeping it up.  So I was worried I’d arrive, find everyone 20 years younger than me and sit in a corner.

(spoiler alert – we are all enough, but I do need reminded occasionally)

Thankfully it was all good and I got chatting to some people as soon as I arrived which really helped.  Honestly, that was the biggest thing – what if no-one talks to me??

Cocktails and drinks were in free flow there which definitely helped the chatter between people.  We had a good amount of time to just chat and get to know each other before the official start of the event.  The day was sponsored by Barbados and so there was a distinctly Caribbean feel to it all.  There were also quite a few of us there, it was predominantly female and not all travel bloggers either.  There were food, fashion and lifestyle bloggers as well as vloggers too.  Some people spent time on Instagram, others on YouTube, others on Twitter – a really good mix of people which I really loved.  I learned a lot from just being around people who do things differently to me.

IceLolly.com kicked off the start by telling us a bit about them.  I do know the brand, but I learned some new things about them and how they do things.  I love that they are genuinely interested in working with bloggers and influencers (obviously since they run these events for us!) and seem to really ‘get it’.  I also loved to hear that they were a company that gives back and that they support some charities too – big name companies can all too often feel soulless but I didn’t get that feeling from these guys. 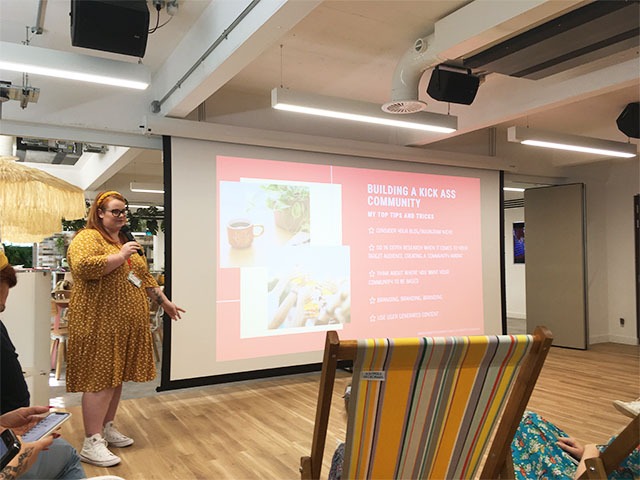 We then had our first talk from a fellow blogger – Kirsty Leanne.  Kirsty (good name!) talked to us about creating a community and how it had really helped her to push her business to the next level.  I’ve heard this idea of communities be pushed a lot and I really think it’s a great one.  I’m not sure how to make it work for me yet, but it got my brain working a bit so we’ll see if I can come up with some ideas. 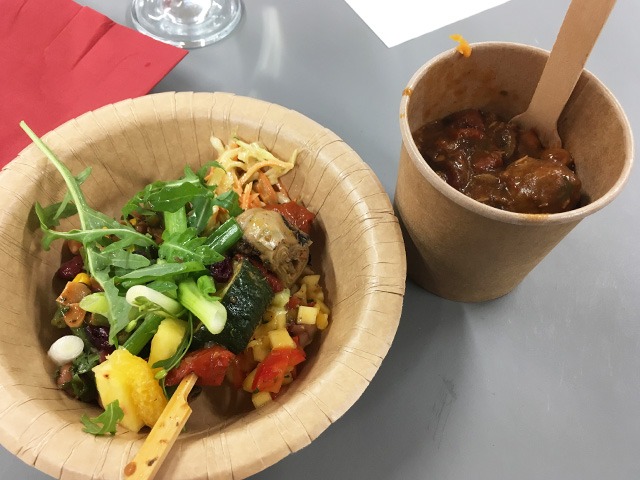 Lunch was next and was awesome Caribbean food which was totally new to me.  I’ve never ventured to that area of the world (yet!) and I’m not adventurous enough with my own cooking to try but it was really yummy.  I eat mostly vegan and events can always be a bit of a struggle for me – do I stick with the vegan or do I just keep quiet and eat what’s there?  There was options for all and so much of it was vegan that I didn’t need to worry at all. 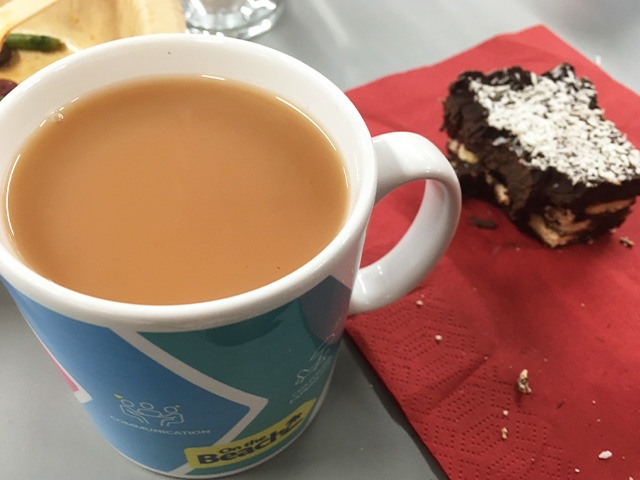 Topped it off with a ginormous slab of vegan rum and raisin tiffin.  Yes don’t mind if I do.  Also while everyone was having cocktails I just really fancied a cup of tea with it!  I voiced that I fancied one and a whole heap of us agreed and set off to make tea – so very Northern!!

Back to the talks and we were whisked away to Barbados courtesy of the sponsors.  Honestly, apart from knowing it was an island in the Caribbean I didn’t know a great deal about it (I should have researched for sure!) so I was really interested to hear about the country.  They are really focusing on showing the island and what it has to offer other than just the beaches.  I was really intrigued about the history there – did you know the island’s capital Bridgetown is a UNESCO world heritage site?  It really brought the place on the radar for me which I guess is the whole point of him being there.  It’s on my list of places to visit now!

As well as hearing about the island it was really refreshing for me to hear from a tourist board about working with bloggers.  I’ve only worked with brands a few times in my blogging career, often preferring to just pay my own way rather than seek sponsorships, but I enjoyed hearing from them and seeing that they were there and actively at a blogger event meant that I’m more confident in reaching out to tourist boards and brands now.  I can get myself a bit bogged down in the hearsay from others about the good and bad things about press trips, sponsored posts and the like rather than figuring out my own path.  It’s an area I’d love to work more on in the coming months. 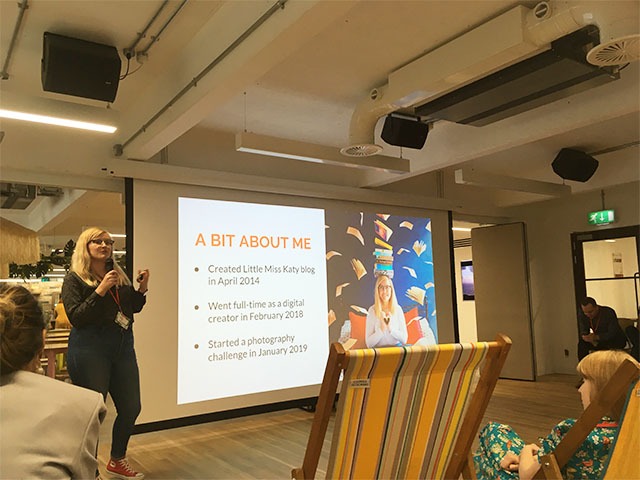 Finally we had a talk on creativity from a popular Instagrammer and blogger – Katy English.  Lots of people had heard of her but since I have a hate/hate relationship with IG I hadn’t come across her work and if I’m honest figured that the talk wouldn’t be for me since I don’t quite know what I’m doing on the platform and concentrating on growing my blog in other ways for now.  I actually loved her talk and it really inspired me.  She was talking about how to be more creative and how to exercise the creativity muscle.  I came home and had so many ideas – I’ve no idea if they’ll move from idea stage to doing stage but I’m pretty excited now.

And that was it, the end of the day for me.  I did spend a little bit more time chatting away to people before I had to leave to catch my train home.  There was more fun and games to be had with a Beer Pong tournament (I had to get someone to explain what it was!!!) but I sadly couldn’t stick around for it which was a shame.

Overall I truly loved the event.  I didn’t really know what to expect but I definitely didn’t expect to enjoy it as much as I did and to come back feeling so inspired.  It’s easy to feel alone on the blogging journey so these events are actually something I think I should try and incorporate so much more.

Thanks so much IceLolly.com and Barbados – I had a blast! 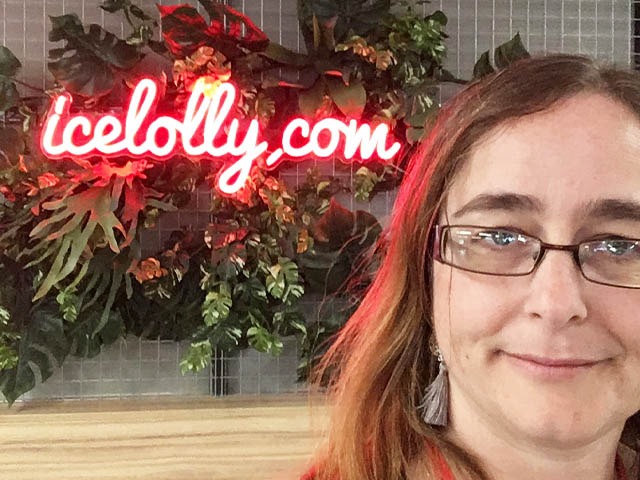 honestly even at a bloggers event I felt self conscious doing selfies!!

Some tips for you if you are attending a bloggers event like this for the first time:

I found out about the event because I’m part of the IceLolly Influencers Hub on Facebook – you can join their group here.