If you haven’t already seen part one of the campervan conversion series then head here to see how we chose a van and prepped it ready for the interior.  The prep work definitely felt a bit boring, a bit safe and didn’t do too much to change the van from how it was originally looking.  Things were about to change though with the help of a jigsaw and metal blade!  Yes, we were about to cut some rather large holes in the van.

Where to buy windows for a van conversion

We knew that there were lots of van windows available online and from various window manufacturers in the UK from our previous research in to potential costs of a van conversion.  However, we came across a bit of a stumbling block when we realised that most of these windows were for newer vans and our old style Citroen Relay was never listed as having a window available.  We needed another plan.

(Actually, if you have this van or a Peugeot Boxer/Fiat Ducato variant from the same era I’d try this place – http://leisurevehiclewindows.co.uk as they might have something – we never enquired as we came across another solution)

There are a few options when it comes to finding windows.  You can get:

Have a guess what we went for!  yup, the last one.  Actually we also fitted portholes in the back of the doors as well for more light which I’ll talk about as well.

We found locally someone selling some windows from an LDV convoy minibus for the grand total of £20 each and we couldn’t pass up that offer.  The windows looked very similar to the horse box windows we’d seen on eBay and we figured we could fit them the same way.  The windows had holes around the frame which we planned to fix with rivets to the van and seal around the edges to make them watertight.  We got one plain window and one sliding window that opens.

Our first step before we fitted them was to tint them with some limo tint.  We again went with the budget option of buying some tint online and trying to fit it at home.  If we were aiming for a more high end look we might have got them done professionally but the cost of that didn’t seem worth it for us.  We got 95% tint similar to this one which I was slightly worried would be too dark, but in actual fact was perfect.  No-one can see in but we get plenty of light inside. 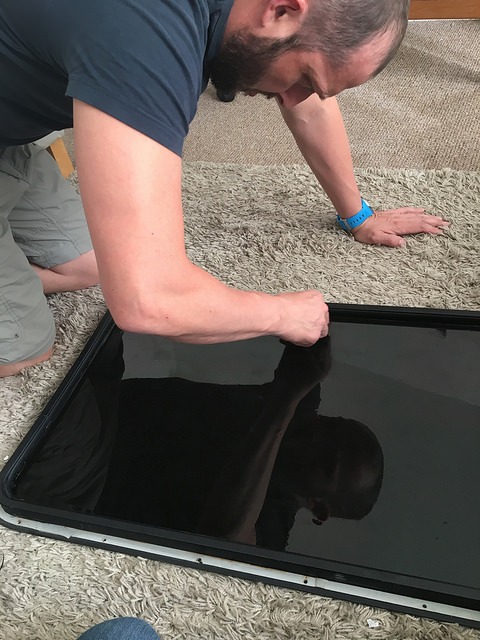 I’d definitely recommend tinting before fitting as I imagine fighting gravity with the tint would not be fun!  It’s very easy to do – you spray the window with water, take the backing off the film and then place on the window.  Use a credit card or similar to smooth out any air bubbles and trim the edges.  If doing them again I’d possibly try to use some paper to make a template and cut the film first, but I reckon you’d still need to do some trimming anyway.  I guess it might depend on how your window is.

For less than £10 it was a definite success and even though there are a few bubbles and it’s not quite perfect it works for us and I’m really happy with them.

After the tinting was complete we had the ambitious job of actually fitting them which required cutting a hole in the side of the van.  The old phrase ‘measure twice, cut once’ was uttered many times and I measured as many times.  Didn’t quite go to plan though!

Let me explain.  Because we were fitting non standard windows I had to figure out exactly where they went.  I started with the sliding door and there were a couple of indentations on there anyway which I aimed to fit the window squarely between.  I spent ages making a template, measuring, making sure it was square with my new measuring square, using masking tape to draw the shape and when I was finally happy we started by drilling a hole for the jigsaw to go in.  I was watching from inside as James drilled and I realised with horror that it was going to foul against some of the insides of the van door.  Argh!  I had to rethink and patch up the holes.  Oops. 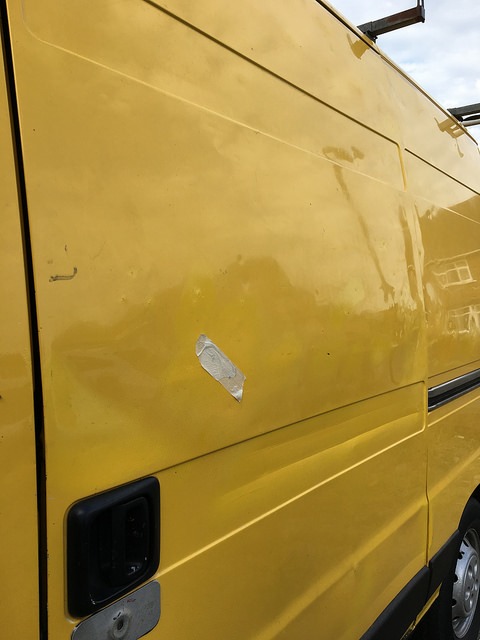 You can see the lines I was trying to keep central within here.  Tonks had her first injury and needed a plaster!

After a bit of thinking and some more measuring and marking out, we started again.  Lots of trepidation as I was hoping I hadn’t messed up again.  We took it in turns to do the cutting, which was actually not as tricky as I thought it would be.  It certainly was easier than the roof vent when we cut that – I think because it was flat and not ridged. 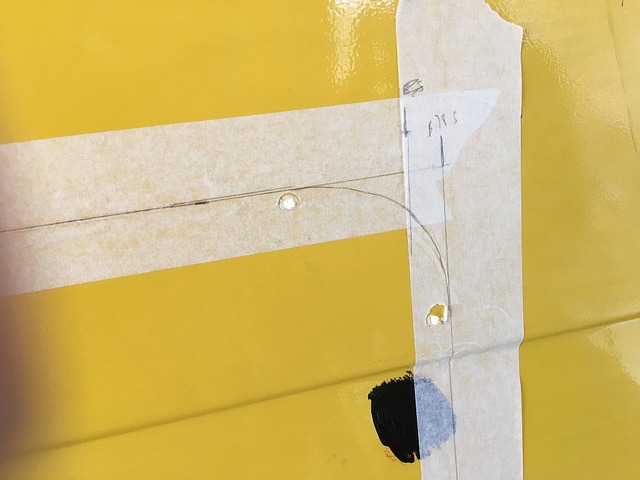 Second time lucky – marking up using masking tape and drilling holes for the jigsaw to go in. 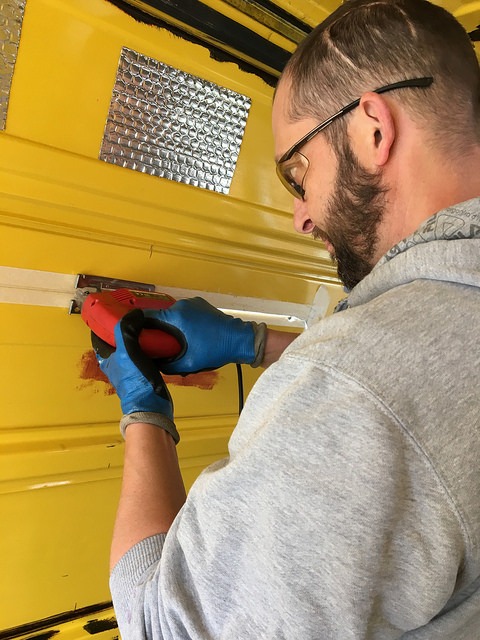 Once we had cut the hole it was time to fit the window – it needed a bit of filing down in some areas but it fitted nicely.  Time to move on to the riveting and sealing.  Actually, before we did that we just went over the raw metal edge with some black metal paint so that it didn’t rust – something not to forget.

We borrowed a pop rivet gun from my father in law and got the required rivets from eBay to attach it.  Do look at what sizes you need as it depends on the thickness of what you’re fixing, and also get blind rivets which will be waterproof.  I guess you could have used screws and attached it to a wooden frame inside, but we figured rivets were a more secure option and less likely to be a target for thieves.  This part was also fairly easy but took a little longer than I expected.  We had to drill a hole and then put the rivet it.  James pushed the window as tight as possible to the van while I riveted it in.  The pop rivet gun is really easy – there’s loads of videos on youtube, but I’d recommend testing out how to use it on some scrap before hand.  We worked from the centre to the outside so that it would keep the metal of the door smooth and we drilled one at a time rather than just marking out and drilling, because as you do each rivet it might shift the window slightly.  We wanted it as smooth as possible to stop any leaks. 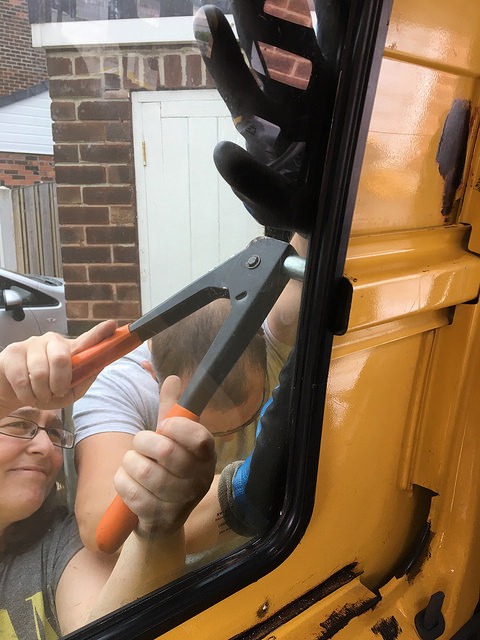 After it was fixed we used some Sikaflex that we got from Screwfix to seal around the window.  I’ll admit, I hated this stuff – we got black and it just was awful.  It got everywhere and despite my attempts to be really clean with it it just hated me. We sealed all round the edges of the windows and also over where the rivets are.  Everyone raves about Sikaflex, but meh.  Maybe it would be the same with any other make?

And that was it!  Window fitted and all we had to do now was repeat on the other side!  The second one was so much easier as we used the bit of metal we cut out as a template which worked much better than my cardboard one.

We did have some issues with leaks through the sealant which I think was because we were just newbies at using it.  We just kept resealing and covering up any gaps until it stopped.  We got there eventually!  Definitely check as often as you can by dousing the windows in water before you move on to covering up the walls inside with insulation and wood.

Oh and we fixed our initial holes that we put in the wrong place by adding a rivet and sealing round it.  James then added a sticker over the top to hide it.  All part of the story!! 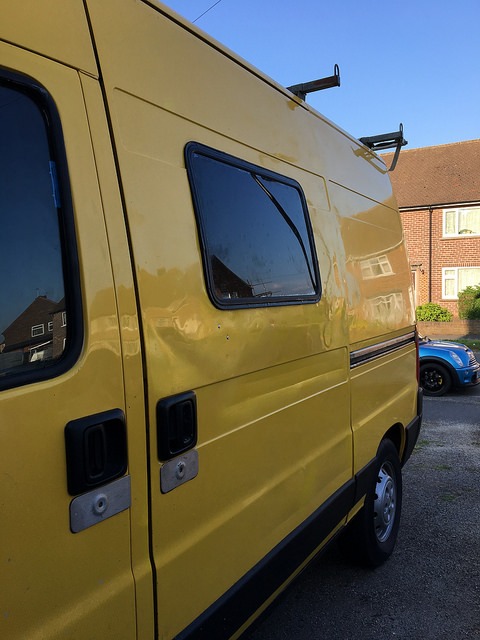 We also purchased some fairly inexpensive perspex porthole windows from eBay for the back doors.  I thought they’d give a nice quirky look to our van and also allow us to see outside nicely.  The process was pretty similar although we used screws and a wooden frame attached to the inside of the back doors this time.  I’m pretty happy with them although they do seem to mist up a lot, so not sure if they need sealed a little bit more. 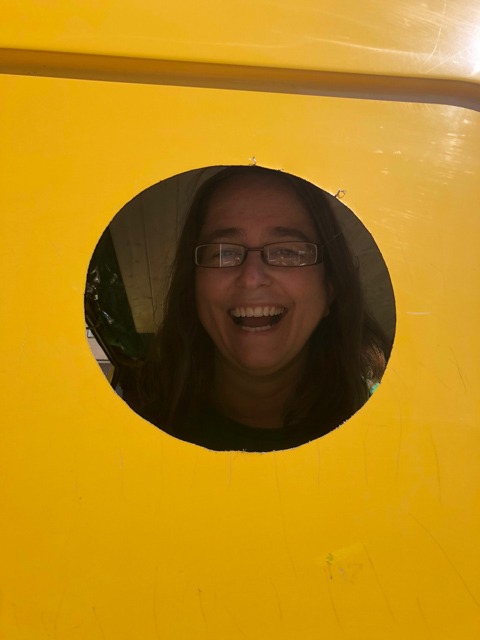 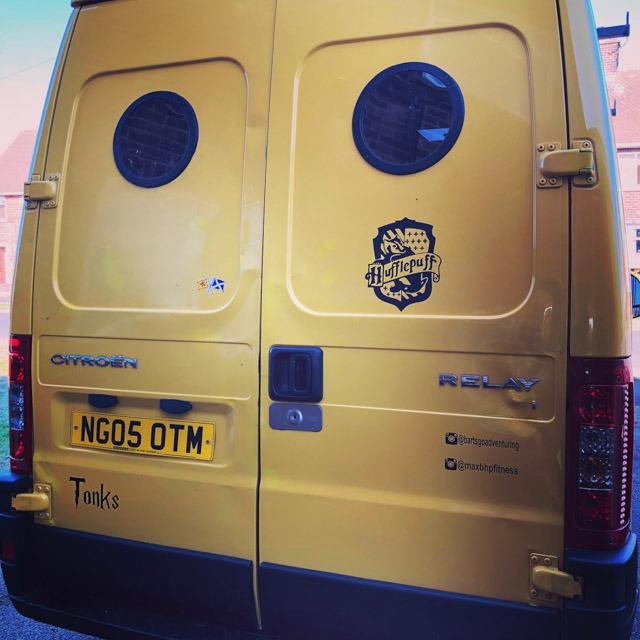 Jigsaw blades – you want fine tooth blades for cutting metal. We got a mixed pack so we had new ones for wood cutting too.

This post is part of a series about our van conversion and documenting our story.  The other parts are linked below:

Part 1: The beginning, choosing a van and treating for rust.