The Isle of Rum in Scotland has a mysterious exterior.  From the beach on the mainland that we camped near we kept looking for it over the sea.  We could see the isle of Eigg, sometimes, but Rum just kept itself hidden behind a load of cloud.  On the morning that we set off we looked again and finally saw the peaks of the Rum cuillins in the background.  Excited doesn’t even begin to describe how we were all feeling! 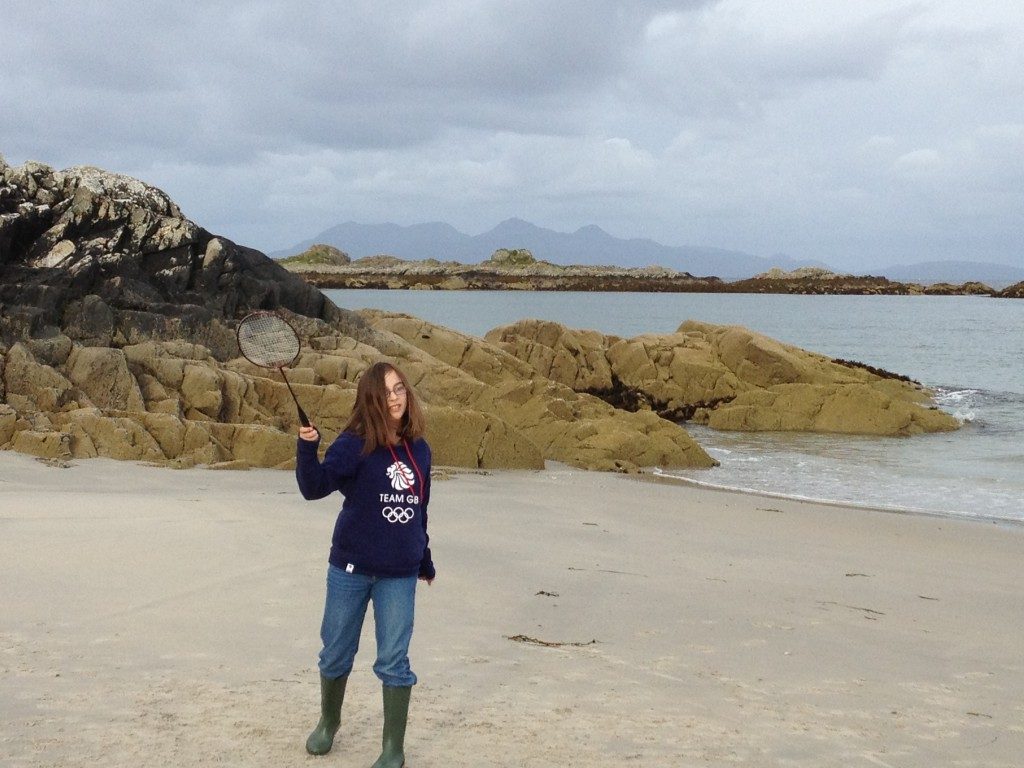 The kids played badminton and we finally we got a glimpse of Rum over the sea.

Our very good friends moved to this island in April this year and we’d had the date in the diary to go and see them for absolutely ages.  As time got nearer it occurred to me that actually I couldn’t even begin to imagine what life would be like for them on Rum, or even that I really believed they were there!  Until we saw them, it seemed like it could have been an elaborate ruse!

I had a lot of preconcieved ideas about Rum.  If you search out information about it you hear about giant midges (possibly an exaggeration), lots of rain,  and well it’s Scotland which is normally midge filled and rainy so if it’s worse than the norm what would it be like?  I knew the wildlife there would be stunning and we love nature, but what else would there be to do there on an island with only 40 people?  I’ll admit that although I was excited beyond belief to see our friends I had no idea what I would think about the island they had called home.  I fully expected to come away thinking they were crazy and the island was best left to the midges!

Arriving on The Isle of Rum

We struggled on to the ferry with far too much luggage and watched the mainland get farther away.  We tried to stay on deck to watch out for wildlife as much as we could but it got colder and rainier.  At one point Alex and I looked outside and were greeted by some cetaceans in the water.  I’m not sure exactly what they were but we decided that they would be minke whales (as we’d not seen them before!!)  On arrival thankfully our friends had brought their car for our masses of luggage and there started almost a week of fun and frolics on an island that seems miles away from our real life.

I was introduced to many of the islanders as the week went on, although I’m quite rubbish with names and I’m not sure I really am putting the right names to the right people.  The small community was one of my big concerns for my friends, what happens if they were all nutters?  What happens if they fall out?  What if they all dance round fires naked?  I’m still not sure the answers to all that (especially the nutters and dancing q’s!) but they seemed like such a fantastic bunch of people I couldn’t help but like them all.  They all seemed different, but all welcoming and friendly.  There is a shop on the island and it’s a gathering point for people to catch up and have a drink and I often saw tourists to the island joining in there too.

There seem to be loads of events on there too so I wouldn’t worry about going and being bored either.  We went on a fungi walk with Mike the community ranger which was excellent and we’d have liked to also take a boat trip around the island but unfortunately bad weather timed itself to match the day of that so it was cancelled.  There are often talks on at the community hall as well. 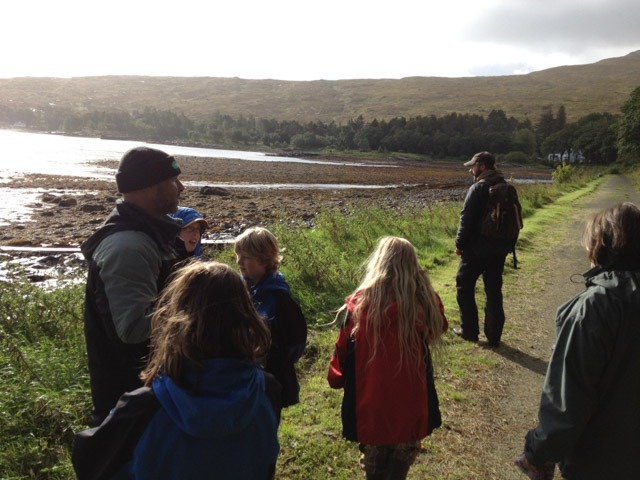 We saw deer, sea eagles, seals, buzzards.  We tried fishing and Marcus caught his first fish, we foraged for blackberries and rosehips.  We walked up and down the hill that our friends croft was on sooooo many times that I came home and my jeans kept falling down!  We listened to my friends as they spoke of their ideas for their croft and gazed at the view outside. 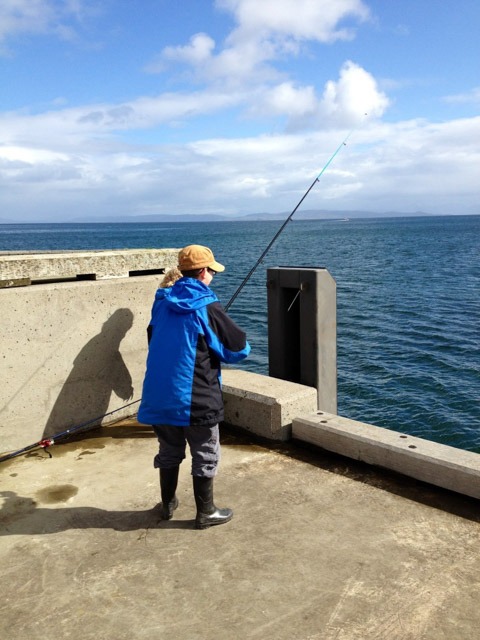 Marcus had been waiting to try fishing for so long – he stayed there for ages! 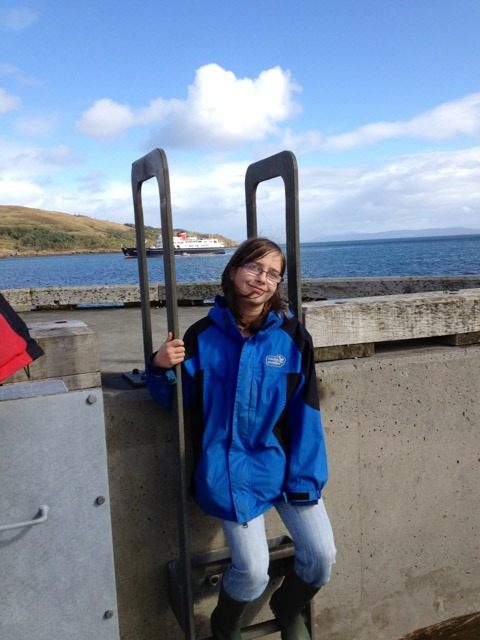 I loved watching the weather there too.  Changeable is probably the best way to describe it, you could be sat in a shower but almost always you’d see blue sky in the distance and know it wouldn’t last long.  I saw so many beautiful rainbows there. 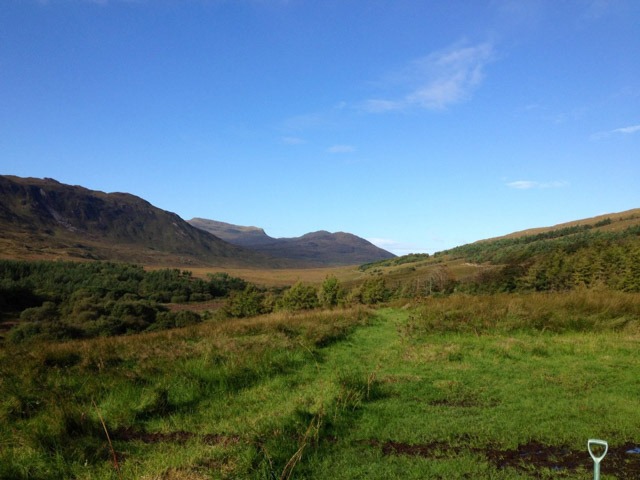 Croft 3.  This is the view from my from my friends croft – how stunning?

We were there for 5 days and I don’t think we even scratched the surface of that island.  There are footpaths and hills to climb.  There are beaches on the other side of the island I’d love to go to.  There’s the boat trip I hope we’ll do next time. 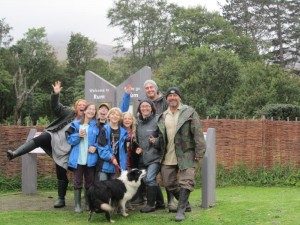 I want to get a better view of a sea eagle and we want to catch a fish we can actually eat!  There’s also Kinloch castle that we planned to look round but didn’t get chance either.

We had plans to go there next year while we were travelling anyway, and part of me worried I’d hate it there and not want to go back or if I did maybe just a night or two, but I am completely sold.  I can’t wait to go back to the beautiful island of Rum with its fantastic people, views and nature

For more info on the Isle of Rum why not visit their website here.  At the moment accomodation for tourists is a little limited, but with a new B&B coming soon and hopefully our friends on Croft 3 will be in a position to offer something soon too.

Getting to the Isle of Rum

The Isle of Rum is reached by Calmac passenger ferry from the port of Mallaig.  There are no cars allowed on Rum apart from the resident’s cars so foot passengers only.  The ferry goes round all of the Small Isles and normally departs in the morning.

Mallaig is a small town about an hours drive from Fort William and is easily reached by train as well (going over the famous Glenfinnan viaduct from the Harry Potter films).

If you’d like to stay in Mallaig then the Marine Hotel is a good choice for families.  Click here for latest prices.

If you’re after a budget option then check out The Mission Bunkhouse.  Click here for prices.

Fort William is a much bigger town and as such has more options for accommodation. The Imperial Hotel comes highly recommended here.  Click here for prices.

There is also a Travelodge which can be good for a budget option especially for families.

3 thoughts on “Adventures on the Isle of Rum”